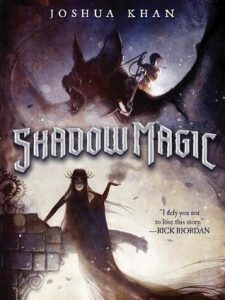 Khan, Joshua. Shadow Magic. New York: Disney Hyperion, 2016.  978-1484732724  $16.99. 321 pp. Gr. 4-8.
Guilt-ridden, peasant Thorn is searching for his father when he is captured by slavers and bought by Tyburn, who is Gehenna’s executioner.  Lilith Shadow is the new ruler of Gehenna since the murder of her parents and favored brother, and she is uncomfortable with that role.  Oddly enough for a people who live by magic, women are forbidden to learn or practice magic, so Lilith is at a loss as to how to protect her people.  As generations pass, the Six Houses (including Solar, Djinn, Herne, Typhoon and Coral) are slowly losing their original magic.  To bring together the powers and prevent war, Lilith is betrothed to Gabriel of House Solar, and she loathes the idea even before she meets the arrogant, beautiful boy.  When Tyburn brings Thorn to Castle Gloom, Lilith’s home, Thorn becomes easy friends with both Lilith and K’Leef of House Djinn, held to keep war at bay.  Thorn isn’t popular with Gabriel and while escaping a beat-down, he unearths a giant bat named Hades, who will allow no one but Thorn to ride him.  Meanwhile, attempted murder of Lilith is discovered (Lilith’s puppy is the unintended unfortunate victim) and everyone is trying to locate the person(s) responsible.  THOUGHTS: An interesting backstory and unique magical power (that can unearth zombies) and gorgeous illustrations by Ben Hibon, set this story apart.  Even with the third person omniscient narration, readers don’t deeply know any of the characters.  Despite this, it has been well-liked by my students who have read it.  With an intriguing history and world as large as Khan describes, many sequels could be produced. 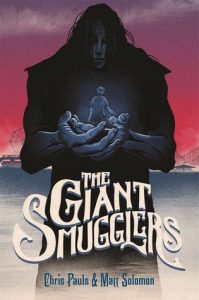 Pauls, Chris and Matt Solomon. The Giant Smugglers. New York: Feiwel & Friends, 2016. 978-1250-066527.  $16.99.  278 pp. Gr. 4-7.
Charlie has spent all summer immersed in his favorite video game and enjoying the oblivion.  Now it’s time for school to begin, and he knows boredom is on the way.  Charlie’s older brother dumped college plans for life as a carnival worker, much to the disappointment of their mother, and much to the embarrassment and anger of Charlie.  Charlie’s mom has a well-meaning boyfriend, but it seems like Charlie is mostly on his own.  A nasty classmate, “Fitz,” full of anger who wishes to be the biggest and best, hones in on Charlie immediately.  So when Charlie stumbles upon a giant, a real, live giant, in an abandoned warehouse, he knows he can’t ignore it.  He sneaks in to see the giant, also discovering that an old farmer is looking out for him and moving him when he might be seen.  Charlie has no idea that he’s stumbled onto a ring of giant smugglers, who move the giants out of danger to relocate them with the rest of their kind.  Of course, nothing that big can stay hidden forever, so intermittent sightings have excited scientists who are ruthless in their determination to capture and study a giant “for the betterment of humankind.”  It turns out that bully Fitz’s father is one of those scientists.  Sean Fitzgibbons is fueled by his own failures enough to use his son as a guinea pig for his growth serums, and the possibility of using giant hormones (GGH, giant growth hormone) is enough to drive Fitz and his father crazy with need.  Charlie finds himself in the middle, with little but good intentions to stand in the way of the giant’s capture.  THOUGHTS: The premise sounds intriguing and the story’s pace keeps the book moving, but the character depth is lacking.  Even the supposed friendship between Charlie and the giant (which he names Bruce after Bruce Lee) is hard to believe when the giant can barely communicate, and the two have spent so little time together.  The authors neither show nor tell their relationship which is the crux of the story.  The story would benefit from plenty of interspersed illustrations like its cover, done by artist Matthew Griffin.  This could possibly be enjoyed by upper elementary readers who enjoy lots of action without a lot of depth.
Fantasy      Melissa Scott, Shenango High School