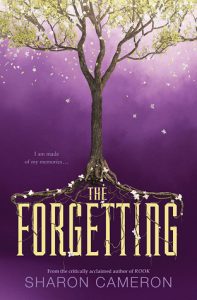 Canaan is a sheltered, quiet city, free of technology and surrounded by a large, secure wall. The citizens live in peace, writing about their “truths” in their books, which remains attached to them at all times. They will need these books and their truths after The Forgetting, a day without consequences that occurs every twelve years. All members of Canaan forget, and what isn’t written, isn’t remembered. But Nadia, the Dyer’s Daughter, does not forget; she remembers the chaos of the last Forgetting and how her mother, father, and sisters forgot her name. She remembers a sky the color of fire and the screams as people committed heinous acts without remorse. Since then, Nadia has found it hard to trust anyone. As the town prepares for the next Forgetting, Nadia meets Gray, the Glassblower’s Son, and together they sneak over the wall to explore the beyond. But they uncover a secret that not even the town’s highest council members know which could shake the foundation of Canaan to it’s core. And, as Nadia begins to fall for Gray, she begins to fear the Forgetting like never before and is determined bring the real truth to her city. THOUGHTS: With elements of The Giver and Lost, Cameron weaves an engrossing and thought-provoking story for middle schoolers and teens. A must for any library where science fiction and fantasy reign.

Nadia and her family live in the city of Canaan, a walled city where the people carry their life stories around with them, required by law to write down their thoughts and experiences in their books. Every 12 years, the Forgetting comes; people’s memories are wiped, and the only connection they have  to their pasts is the entries they have written down. The lives of the citizens are carefully regulated; there are assigned occupations, set times for waking and resting, rations are doled out by the Council, and no one is permitted outside the walls. Nadia is different from everyone else; she seems to be the only one who actually remembers what happened before the last Forgetting, and she is the only one who scales the walls to venture into the outside world. She guards her emotions and never becomes close to anyone, since she knows all will be forgotten. But when Gray, a neighborhood boy, confronts her as she returns from a night outside the city, he becomes her friend, her confident and more. As the next Forgetting looms closer, the two of them are determined to find out what really happens, and they discover much more than they bargained for. THOUGHTS: Though the writing is very descriptive and the characters are well developed, this dystopian romance and sci-fi adventure is very slow to build and does not really build up steam until the final few chapters. 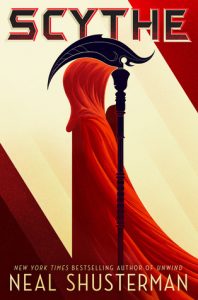 Another compelling dystopian series in the making from Shusterman. In MidMerica, technology and science have advanced so that death is no longer a reality for most people. Illness and injuries can be quickly cured and people can live for centuries, able to reset their clocks to younger ages. But population control remains an issue, so scythes are selected to “glean” individuals to keep numbers down. A scythe is an honored and feared individual who decides who shall die and carries out this sentence using a variety of tools and techniques at their discretion. Scythes are expected to be beyond reproach and the law; they should have compassion and integrity to carry out their task, and every so often a scythe must select an apprentice to train for this awesome responsibility. The serious and respected Scythe Faraday has broken with tradition and selected two, Cintra and Rowan, both seventeen, who begin their training in the arts of killing. When Faraday unexpectedly gleans himself, his apprentices are pitted against each other in a contest in which only one will live.  THOUGHTS : An interesting premise with a look into a world perfected by the “Thundercloud”, the AI super program which has solved all conflicts, cured  all afflictions and governed all nations. But what is the value of human existence when there is nothing to provide purpose or meaning? 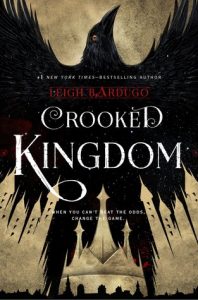 Kaz Brekker and his crew of misfits: Inej, the silent thief and killer; Jepser the perfect sharpshooter; Nina, the Grisha Heartrender; Matthias, the once cold-blooded Fjierdan and Wylan, the illiterate merchant’s son, have just pulled off a seemingly impossible heist and broken an important Grisha out of an impenetrable jail. This Grisha, Kuwei Yul-Bo, holds the key to jurda parem, a dangerous drug that if unleashed could wreak havoc on Ketterdam and the rest of the world. But the merchant who hired them, Jan Van Eck, has double crossed them, kidnapping Inej and refusing to pay the reward he promised for the job. Kaz and his crew must work together to not only free Inej, but to hold onto the secret of jurda parem in order to prevent war on their streets.  Bardugo once again creates an exceptionally vast world with rich characters and an incredibly tense storyline that will keep readers hooked until the very end. THOUGHTS: Fans of the Grisha trilogy and Six of Crows will not be disappointed; these series have taken YA fantasy to the next level and made it one of the best genres on the market today.