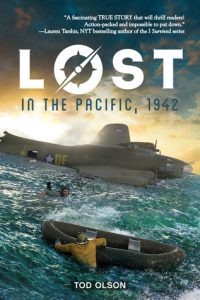 Over the Pacific Ocean, on October 21, 1942, a B-17 bomber was flying with eight men aboard. The purpose of the flight was a secret mission to deliver celebrated WWI flying ace Eddie Rickenbacker to the Pacific theater of the fighting on a fact-finding trip. But when the plane runs out of fuel, the pilots are forced to ditch into the Pacific Ocean. Amazingly all eight men survive the crash landing of the plane, but the chances of their survival seem slim. They are afloat in three small rafts in shark-infested waters in enemy territory with minimal supplies of food and water. Author Tod Olson relates their amazing survival story in Lost in the Pacific. Over 22 days adrift at sea, the men faced hunger, illness, exposure and more. Sadly, one airmen did not survive the experience at sea. As time elapsed, personality clashes emerged (particularly between the authoritarian Rickenbacker and the men) as they debated the best course of action to take. The text is enhanced by the presence of photos, maps and historical images. THOUGHTS: This title is sure to be a hit with fans of WWII literature as well as fans of adventure stories. Reluctant readers will also find them drawn into the engrossing and action-packed tale. Olson does an excellent job of conveying the personalities of the individual airmen and emotional stressors they faced while adrift at sea. Recommended for middle school purchase.