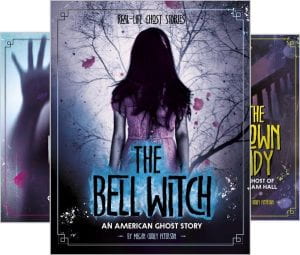 Real-Life Ghost Stories features tales of spooky hauntings and happenings from around the world. Each volume focuses on an individual ghost story. The history behind the event or location is related and then readers learn about the subsequent claims of ghostly appearances. Fact boxes and skeptic’s notes offer readers background information as well as alternate explanations for the ghostly sightings. This reviewer had the opportunity to read The Brown Lady: The Ghost of Raynham Hall, a classic example of a haunted English manor house story. Raynham Hall not only has its own ghost (Lady Dorothy Walpole), but it was also the location of a famous photo that supposedly captured the ghost on film in the 1930s. The title features numerous illustrations, as well as photographs of the house, including the famous ghost photo. The cover illustration is also very appealing to potential browsers.

THOUGHTS: These spooky titles are sure to capture the interest of readers interested in haunted tales or mysterious happenings. They would also be a great addition to Halloween/October book displays. Libraries looking to add to their ghostly non-fiction shelves should consider this worthwhile series.
133.1  Ghost stories                Elizabeth Henry, Lampeter-Strasburg SD