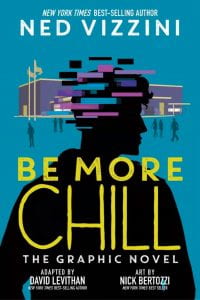 High school is hard. Jeremy finds it especially hard being an awkward nerd who can’t seem to say the right thing to anyone. He really wants to catch the eye of Christine, a pretty girl he sees every day at play rehearsal. When Jeremy tries to talk to her, he bumbles through his words, and that’s when he realizes he will never be able to charm her… until he hears about the squip. The squip is a supercomputer, compressed into a pill-sized capsule and swallowed. After that, it takes over your brain and helps awkward teens navigate through the complex social hierarchy of high school. Don’t know what cool clothes to buy at the mall? The squip will guide you. Not sure what to say to the most popular girl in school? The squip will tell you. When Jeremy buys one on the black market, he thinks he has squashed his awkward behavior for good. But he very quickly realizes the dark consequences that can come from trying to alter his own biology.

THOUGHTS: This graphic novel, adapted from the hit Broadway musical of the same name, will resonate with any high schooler who struggles to fit in. The art, done mostly in black, white, and blue, shows the differences between dialogue and the squip’s commands, making it easy to follow. High school librarians should add this to their graphic novel collections.