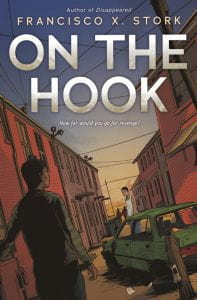 Hector is a decent, smart kid living in the projects since his father died of cancer. He excels at chess and thinks college may be a possibility, so he keeps his head down, desperate to be overlooked by Chavo’s local drug-dealing crew. But Joey, Chavo’s younger brother and a member of the crew, singles him out, carves a “C” on his chest (for coward) and declares, “I’m going to kill you.” Fear invades every space in Hector’s life. He can’t fathom how his father stayed strong, or how his older brother Fili can command respect in the neighborhood. His best friend Azi tries to help and keep him focused on chess and the future. But Hector’s fears overwhelm him daily. He wonders how to change himself and how to be fearless, and he longs to put his cowardly self behind him. But in failing to stand up for his brother when Fili is attacked by Chavo and Joey, Hector spirals downward into deep questioning and self-loathing. Hector is sentenced to six months in a juvenile probation academy, a friendlier place than most in the system, and encounters numerous guards and inmates seeking to teach him to give up the hate he feels. Hector is torn and the outcome is anything but clear. Can he recreate himself into someone he’s proud to be? And what does that look like?

THOUGHTS: This is a realistic look into dangers young people face, inside and out. Despite the numerous safeguards around him, Hector’s choices are anything but clear. Readers will be interested in what he decides to do.