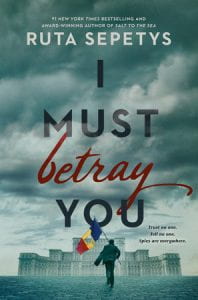 Romania, 1989. Seventeen-year-old high school student, Cristian Florescu, gets blackmailed into informing on the American family his mother cleans for. In exchange for spying on the Van Dorns, he will receive much-needed medicine for his beloved Bunu–grandfather–who has been diagnosed with leukemia and lives with Cristian, his older sister, Cici, and his parents in a cramped, one- bedroom apartment in Bucharest. Tormented by guilt for betraying the trust of his loved ones, Cristian records his feelings in his notebook, an exercise that serves well his aspiration to be a writer. Informers and reporters ooze out of the dank, grey apartment buildings like the cockroaches that live within the dim hallways. Urged or manipulated by the regime instituted by their country’s leader, Nicolae Ceaușescu, even these informers are being informed on. Furthermore, Cristian is driven to suspect the integrity of his own family members. He quickly realizes the desperation of his situation, especially after his informer status affects the budding romance with his classmate, Lilianna Pavel, and almost ruins his friendship with the kind, gentle Luca Oprea. He resolves to follow his orders to get close to Dan Van Dorn, the American diplomat’s son, while recording the grim daily existence of living under Ceaușescu’s dictatorship. When life turns even more tragic for Cristian, the dissolution of the Soviet bloc becomes a reality, and the citizens of Romania, led by the university students and the young, bravely take their stand. Author Ruta Septys is at her best with this suspenseful recounting of lives lived under extreme oppression: punishment for owning anything from the Western world, endless lines to obtain necessities, limited use of utilities, and constant surveillance of one’s every movement and word. This well-researched and engaging work is an eye opener, not only about an existence under Communism, but the political ploys that supported Ceaușescu’s power.

THOUGHTS: This story is riveting! In the eyes of many heads of state during his thirty-year reign, Nicolae Ceausecu was an improvement over the other Communist leaders. In truth, the Romanian people were suffering great hardships, both physical and mental. Cristian’s compliance in being an informer in exchange for medication forms an ethical dilemma. Moreover, his perspective on our American way of life emphasizes our freedoms that may be taken for granted. Besides the obvious history lesson, I Will Betray You, addresses values, self-identity, and matters of conscience.

Cristian Florescu is a 17 year old Romanian boy, and life certainly isn’t easy.  When he is blackmailed into being an informant for the government, he has no choice but to accept. His goal is to gain the trust of the son of the American ambassador so that he can report any suspicious activity from within their home. Through this new friendship, Cristian begins to realize how different his life in Romania is from the rest of the world. Like others in his country, he wants to expose Romanian life to the rest of the world, but when friends and family could be spies as well, it’s not safe for Cristian to even speak of such things. Will he find the strength to join the revolution, or is there too much at stake, including his life?

THOUGHTS:  I Must Betray You is a historical fiction account of Romanian life in the late 1980s under the rule of Nicolae Ceaușescu. Until reading this book, I had never heard the name Nicolae Ceaușescu. After reading this book, I did my own research into the communist rule in Romania and discovered how oppressive life truly was. I was horrified, and at times, I felt as if I was reading a WWII historical fiction novel rather than one set in 1989. I’d highly recommend this to anyone who enjoys historical fiction, especially since it shines light on a time in history that may not be as familiar with readers.