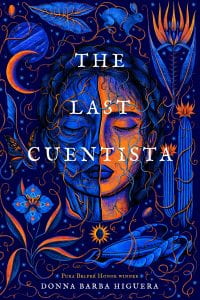 In the year 2061, a comet has been knocked off course and is hurtling to planet Earth. While the majority of earth’s citizens will die as the comet collides with the planet, a small group of citizens are selected to travel to space and prepare to make a new home on planet Sagan. Petra, her brother Javier, and her scientist parents make the cut, but her beloved grandmother Lita does not. Petra and her grandmother have a special relationship, strengthened by the cuentos, or stories, that Lita tells her. Petra lives for these moments with her grandmother and vows that she will remember every single one of her grandmother’s cuentos so she always has a piece of her to share with others. After boarding the ship that takes them away from Earth, Petra and her family are frozen for 380 years inside stasis pods until they reach Sagan. While frozen, each person receives a brain download that inputs all kinds of knowledge so they are fully educated and ready to colonize a new planet when they arrive at their destination. Hundreds of years later, as Petra is taken out of her stasis, she realizes very quickly that she is the only one that remembers anything about Earth – and the plan for colonization has changed. A group called The Collective has taken over the ship and has plans to erase everything relating to Earth and its human inhabitants. According to them, the humans of Earth have made a lot of mistakes, and they do not intend on repeating (or remembering) those mistakes on their new planet. Petra realizes that if she wants Earth’s cuentos to live on, she must fight The Collective from the inside.

THOUGHTS: This book has received a slew of awards, including this year’s Newbery Medal. The Mexican-American main character is a strong female hero that readers will root for. It is a beautiful story filled with loss and hope, which makes it a perfect cuento. A must-purchase for middle grade libraries.