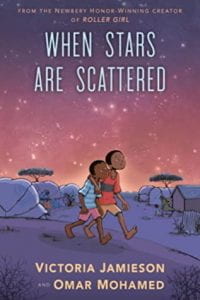 Omar and his younger brother, Hassan, have been living in a Kenyan refugee camp since fleeing Somalia at the age of 4. Omar’s life consists of taking care of Hassan, with the assistance of Fatuma, an elderly woman who has been appointed the boys’ guardian. UN supplied food rations are meager and entertainment is what can be manufactured, such as playing soccer with a ball created from plastic bags. Omar has not gone to school, feeling responsible for Hassan. But a camp community leader encourages Omar to begin attending school, and a new world  opens to Omar. But it can be a painful world, of crushed dreams and disappointments. Brilliant student Maryam who dreams of going to university in Canada, is forced to quit school and get married. The system of choosing people for possible relocation to the United States seems random, and when Omar and Hassan are finally chosen for an emigration interview, nothing comes of it. But Omar continues to study and dream. When Omar is 18 the brothers are finally selected for resettlement. This stunning autobiography portrays, in beautiful color palettes, the reality of life in a refugee camp. Living conditions are horrific, but there are also close bonds of people who care for and support each other. Omar’s horrific backstory is revealed during his first resettlement interview, explaining how he and Hassan came to be in the  camp alone at such a young age. Author notes at the end of the story update the reader on the brothers’ story after reaching the United States, including the delightful surprise that Omar is currently living in Lancaster, PA.

THOUGHTS: This important story is a must purchase for most libraries. It carries the gravitas of Jarrett Krosocka’s Hey Kiddo, but appropriate for a younger audience.

As Omar so succinctly states in the word bubble on the back cover: “Refugee Camps are supposed to be a temporary place to stay until it’s safe to go back home. I guess no one expected the war to last so long, though, because Hassan and I have been here for 7 years.” With gorgeous colors and interesting characters, Jamieson and Mohamed take us through childhood in a refugee camp in Kenya. The monotony of daily essential routines for survival are mixed with increasing odds against finding their mother or going back home to Somalia. What remains is the effort to take care of one another, the opportunity to get schooling and seek a future, and the slightest chance to immigrate to another country for a new beginning. All of these seem unlikely for Omar, who faces tragic memories, current realities, and future possibilities with truth and sincerity that will bring young readers into his world and into their hearts. When the Stars Are Scattered is a remarkable light in the night sky which guides hope home.

THOUGHTS: Both Pennsylvania residents do an excellent job bringing the refugee experience to children. The sibling relationship with Hassan, who is nonverbal except for one word, is truly touching and real. The afterword and authors’ notes bring the story up to date, and help realize the many other refugee stories that need to be heard. Highly recommended.

This beautifully drawn graphic novel tells the story of Omar Mohamed, a young Somalian boy who was forced out of his country and into a refugee camp in Kenya with his young brother at the age of 4.  Omar’s younger brother, Hassan, is special needs and only says one word, Hooyo, the Somalian word for Mama. Omar and Hassan saw their father killed and were separated from their mother as the Civil War in Somalia started. With the kindness of a new foster mother, Omar and Hassan survive and grow up in the Dadaab refugee camp. Omar’s life changes when he starts school and excels, earning the right to continue to attend school as he grows up. Omar and Hassan never give up looking for their real mother, and in the Afterword we see real photos of Omar and Hassan, and learn that, years later, they are reunited with her.