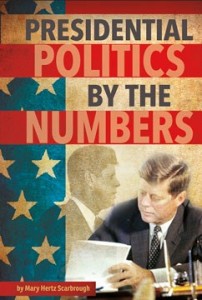 Students may be caught off guard that George Washington’s second inauguration speech was 135 words long and by other statistics detailed in Presidential Politics by the Numbers. Faster than it seems, another election is just around the corner. While Lincoln is regarded by many students and historians as a standout president, the book The Election of 1860: A Nation Divided on the Eve of War details the struggles Lincoln faced and the turmoil of the nation during that time period. A Timeline of Presidential Elections divides the history into ten chapters with clear date boxes. The series is ideal to display around elections and also to supplement topics related to presidents in the classrooms. The books contain chapters with elements that draw in readers including infographics, primary images, maps, critical thinking questions and sidebars. A detailed glossary, further reading suggestions and an index are also included. THOUGHTS: There is also a fiction book to tie into presidential elections called Tommy McKnight and the Great Election (Capstone, 2016). The fiction book is inspiring. The main character, Tommy, struggles with the effects of Polio. When he sees that the presidential candidate Franklin Delano Roosevelt does not let the disease stop him from political goals, Tommy is empowered to reach his goals. There is a great importance is having fiction and nonfiction pairings for students and this series provides this option. Presidential Politics is set highly recommended for upper elementary and middle school library collections. 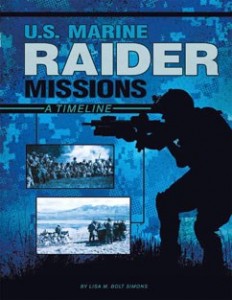 U.S. Navy Seal Missions and U.S. Marine Raider Missions, along with the other books in this series, are picture rich in their overview of elite military groups and their history. Terms are in bold with the definition on the same page in a caption box.  Events such as the Battle of Baltimore, Operation Detachment, Afghanistan Ambush, Operation Just Cause, and Operation Neptune Spear are presented. The time frame includes an overview of the event and a full page image. The ending material of the book includes a glossary, additional books to read, and information to access at Fact Hound for reviewed websites. The last page has ideas to incorporate Common Core with critical thinking and concludes with an index. THOUGHTS: The books have a balanced blend of images, history, and organized presentation of content. These books will help to provide students with current information along with the history. The books present subjects that matter to students in an engaging fashion. 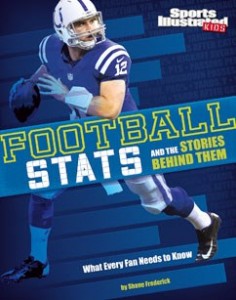 Dramatic images from Sports Illustrated capture the excitement found in the respective sports from the past and current times. Numerous examples of mathematical breakdown of facts are detailed. One example is the 15 steps to determine the quarterback passing rating. The basketball stats includes mathematical directions for records including points per game and field goal attempts. Learn more of the phrases of sports like “Hack-a -Shaq.”  The content is presented in chapter format. Rankings of the top 5 athletes are devised for specific categories or positions. Terms are defined in a stat glossary. The books suggest additional books to read and directions to access Fact Hound for reviewed websites. THOUGHTS: The books provide an engaging read with facts extending the knowledge of history and breakthrough athletes. Also share these books with your physical education and math teachers for all of the cross-curricular topics.