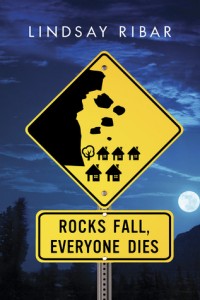 Aspen Quick can reach inside of people and steal almost anything: thoughts, feelings, memories, or physical attributes. It’s a family trait the Quicks of Three Peaks, New York, have always used to perform the “triad ritual” that repairs dangerous fault lines in the cliff looming over their town. And sure, maybe Aspen occasionally uses his ability to make his life a little better (e.g., manipulating his crush into breaking up with her boyfriend and falling for Aspen instead). Following his cousin Heather’s death, Aspen becomes a regular member of the ritual. But he notices something strange afoot in seemingly idyllic Three Peaks; local teens still talk about Heather in the present tense, and one of them seems immune to Aspen’s abilities. The novel’s interesting structure, with scenes from “Before” closing each chapter, adds context even as the holes in Aspen’s memory are revealed. THOUGHTS: With Rocks Fall, Everyone Dies, Lindsay Ribar has stirred up a singular brew of summer love, magical realism, and family secrets. It’s a satisfying stand-alone that readers of Laura Ruby’s Bone Gap will enjoy.

Bo Dickinson and Agnes Atwood could not be more different.  Bo comes from a family of drunkards, drug addicts, and criminals and has a reputation for being wild.  Agnes, on the other hand, goes to church with her parents every week and always follows the rules.  Because she was born legally blind, Agnes has lived a very sheltered life.  When Bo suddenly enters her life, Agnes is curious about the world outside her small circle, and the two become best friends.  That’s why Agnes doesn’t hesitate when Bo asks her to run away from their small, rural town with her.  Told in alternating perspectives, Agnes explains how their friendship formed while Bo relays the events of their road trip.  Throughout the course of the book, the two will share secrets and new experiences, break rules, and form an indestructible bond.  A solid story of friendship, this book has some edgy topics that will be relatable to many teens: bisexuality, sexual experiences, disabilities, dysfunctional family dynamics, underage drinking and more.  THOUGHTS: This book really opened my eyes to what life can be like for those who are blind and how refreshing it can be for others to treat them like normal people (as Bo does for Agnes) rather than treating like they are handicapped.  For that reason, I could see this book pairing well with Blind by Rachel DeWoskin or with books about other disabilities or abnormalities, such as R.J. Palacio’s Wonder or Sharon Draper’s Out of My Mind.  I would warn purchasers, however, that the book contains some graphic language and edgy content, so it may be more suited for older readers. 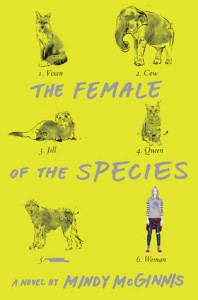 Three years ago, Alex Craft’s sister Anna was found in pieces in the snowy woods. Without enough evidence to convict the killer, Alex watched her sister’s murderer walk free. Now she watches and waits, and becomes what she thinks and feels; violence and vengeance. With her own crime unpunished, Alex retreats from her family and peers, afraid to unleash the violence buried deep inside her. While volunteering at an animal shelter for her senior project, Alex meets Peekay, the local preacher’s daughter, and an unlikely friendship blossoms. Now venturing into the high school social world, Alex also meets Jack, who begins to chip away at her hard exterior and see the person underneath- but with that person also comes darkness and anger. Told through Alex, Peekay, and Jack’s alternating perspectives. McGinnis expertly taps into the often uncomfortable yet realistic world of teenage drinking, drugs, and sex, as well as the social pressure that accompanies it. THOUGHTS: While the ending seemed a bit rushed and dramatic, McGinnis is an excellent storyteller who expertly unravels Alex and Anna’s story over the course of the book. Jack, Peekay and Alex are far from the perfect teen, which makes them all the more relatable to teen readers.