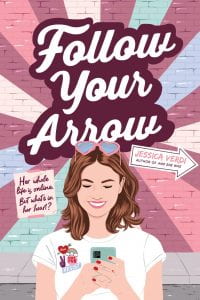 Life seems perfect for Cece Ross. She’s only a junior in high school, but she’s a successful social media influencer with several sponsorships. She and her girlfriend, Sylvie (also a social media influencer), have been together for two and a half years; sure, they bicker sometimes, but that’s normal when you’re in a relationship that long, right? Apparently Sylvie doesn’t agree; out of nowhere, after they finish a live stream unboxing video together, Sylvie breaks up with her. Not only is this devastating as Sylvie is her first love, Cece also wonders how this will affect their commitment to speak as the Grand Marshals of the upcoming Cincinnati Pride parade in just a couple months. She’s also not used to doing the whole social media thing without Sylvie, and Cece constantly worries about how she is being perceived through the app. Not long after the break-up, Cece meets Josh, a sweet and friendly violin player who avoids social media entirely. Cece has always known she’s bisexual, and Josh definitely has boyfriend potential, but he doesn’t realize who Cece is or how famous she is. Josh has expressed disdain for social media influencers though, so she decides it’s best to keep him out of the loop for now. But how long can she keep this secret from Josh as he becomes more than just a friend and social media gossip starts running rampant?

THOUGHTS: This is a mostly light-hearted and fun romance, but it also tackles some important topics we cover in schools: bullying, homophobia, digital citizenship, and pressures of living life online, and most importantly, biphobia. Cece deals with a lot of the latter in the final third of the book as her relationship with Josh becomes public. A Junior Library Guild selection, this book is great addition to YA collections to expand bisexual representation.