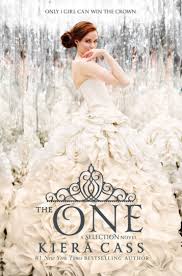 In The Selection series, Prince Maxon, the crown prince of Illea, is of marriageable age and must go through the process of choosing a wife.  The first and second books in the series (The Selection and The Elite) talk about the Selection process and the unrest that exists in Illea.  The series is set in a dystopian, futuristic United States ruled by a monarchy and organized in a rigid caste system.  The One is the final book in the series.  In a process similar to the one in reality TV’s “The Bachelor”, thirty-one young women have already been eliminated from consideration by the prince.  The heroine of the series, America Singer, is from one of the lower castes, but she seems to have won the hearts and minds of many people- including the Prince. She and the three other remaining women are close to each other by the end of the Selection, but all know only one can be Prince Maxon’s wife.

The candidates all have secrets, including America.  America has loved Aspen, now a palace guard, for many years.  He loves her too, and America’s affections seem to switch back and forth between Aspen and the Prince at the slightest provocation.  Fortunately, this book isn’t as frivolous as others in the series.  There is (a little) less attention given to royal parties and ball gowns.  More attention is paid to the injustices of the caste system, the qualities of merciful leadership, and rebellion in Illea.  Both Northern and Southern rebels are unhappy with what is happening to their Country.   However, where the Northern rebels prefer change within the current government, the Southern rebels are violent.  The acts of violence escalate over the course of the Selection Series, and there is a culminating violent scene that will change the characters’ lives and the lives of the Illean citizens.  This is one series that would actually benefit from another volume; I found myself wondering what would happen to the Prince, his bride, and their Country in future years.  The One is a quick and exciting read that many teenage girls will enjoy.