Potter, Alicia. Miss Hazeltine’s Home for Shy and Fearful Cats. New York, NY: Alfred A Knopf, 2015. 9780385753340. unpaged. $16.99. Gr 1-4.
Cats come in all kinds and colors and personalities. When a cat is too shy or afraid to handle life, it goes to visit Miss Hazeltine and learn the basics of bravery. From facing the broom to dealing with the dark and scary noises, Miss Hazeltine is a patient and perfect teacher, even for those who just observe lessons like a scaredy cat named Crumb. But when Miss Hazeltine goes out for an errand and gets hurt, will Crumb or anyone be brave enough to come to her rescue? The illustrations from Birgitta Sif compliment the playful text and make this book a desired home for any cat lover.
Picture Book; cats            Dustin Brackbill, State College Area School District 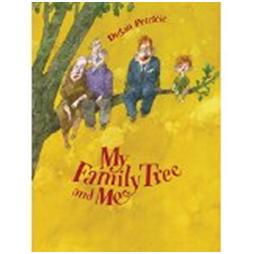 Petricic, Dusan. My Family Tree and Me. New York: Kids Can Press, 2015.  978-1-77138-049-2. $16.95. Gr. K-2.
This book is unique in so many ways, one of which is how it is actually read. If you choose to start the story from the front cover, you will trace a young boy’s family on his father’s side, starting with his great-great-grandparents. Similarly, if you start the story from the back cover, you will be introduced to the boy’s family on his mother’s side. In the middle, no matter how you decide to read the book, you will eventually come to a double-page spread of the young boy’s entire family including aunts, uncles, cousins, grandparents, brothers, sisters, moms, dads, partners, pets, and even the neighbor boy. It is so interesting to see the diversity in the two families and how they’ve melded together to eventually become one large, seemingly very happy and loving group.

I love this book for its ability to offer a strong message in such a simple and intriguing way. We all have different backgrounds and cultures, and that’s what makes each of us so unique. Reading this story and seeing the visual representation of an example of one’s family lineage will undoubtedly spark conversation. Young readers will make so many connections to their own lives and families. On the double-page spread titled “my family”, I also love how no one is left out, not even pets and neighbors. Sometimes we consider people family even if it’s just because we care for them an awful lot. This is a book is a wonderful conversation piece with simple text and quirky, fun illustrations.
Picture Book             Lisa Naylor, Concord Elementary 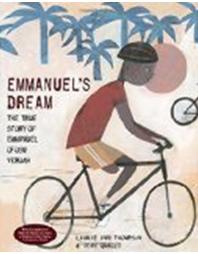 Thompson, Laurie Ann and Sean Qualls. Emmanuel’s Dream: The True Story of Emmanuel Ofosu Yeboah. New York: Schwartz & Wade, 2015.  978-0-449-81744-5. $17.99. Gr. K-2.
Emmanuel Ofosu Yeboah was born in West Ghana with one strong, functioning leg, and the other, severely deformed. While the story does not delve too deeply into the initial challenges of raising a child with a disability in Africa, readers learn that Emmanuel’s father left the family early on, and his mother was left to raise her children alone. It is also clear that Emmanuel’s life would never be easy and he would be faced with many trials along the way. His mother proved to be a driving force in his early years, reminding him that with a little extra effort, he could do and have anything. As the years progress, Emmanuel continued to work hard despite the discrimination he faced. He decided to make a stand by going on a 400-mile bicycle ride around Ghana, stopping to talk to government officials, leaders, reporters, farm workers, and others with challenges similar to his along the way. This journey sent a strong message about determination, and also “proved that one leg is enough to do great things-and one person is enough to change the world.”

This uplifting story could be incorporated into many different units such as cultural, African, or biographical studies. It would also work well in an activism unit or when discussing the idea that we we are all different. Emmanuel Ofosu Yeboah is quoted as saying, “In this world, we are not perfect. We can only do our best.”, and that is such an important message for young children to hear and learn.
362.4 Picture Book Biography     Lisa Naylor, Concord Elementary 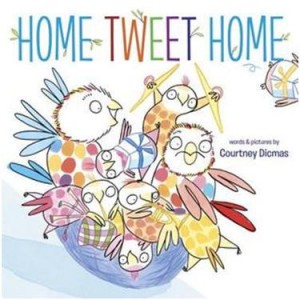 Dicmas, Courtney. Home Tweet Home. New York: Doubleday, 2015. 978-0-385-38535-0. $16.99. Gr. K-3.
The family of cave swallows is large and the nest seems small. This prompts them to look for a new place to live. Exploring for a new location proves dangerous. The artwork looks inviting and friendly on the initial nest sightings that you can ask students where they think the nest will be before turning the page. Bright illustrations are a strength of the picture book. In class, you could ask the students which bird reminds them most of themselves and explain their answer.
Fiction, Picture Book, Family, Housing  Beth McGuire, Wendover Middle School 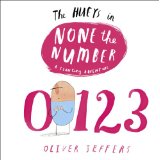 Jeffers, Oliver. The Hueys in None the Number: a counting adventure (The Hueys series book 3).  New York: Penguin, 2015. 978-0-399-17466-2.  $6.99. np. Gr. PK-K.
Only Oliver Jeffers, author of the award-winning The Day the Crayons Quit, could transform a board book that teaches counting into a droll chuckle for grown-ups. So many books of this genre are cutesey and don’t hold up after multiple readings, as the little ones are so fond of doing…but this book does. Jeffers little egg-shaped Huey starts out explaining to his egg-shaped friend that none is a number, and 1 more than none is 1. Each page up to 10 contains funny illustrations of egg-shaped and other characters appearing in little dramatic illustrations of what the quantity of that number looks like, example: “Then FOUR. That’s how many tantrums Kevin throws every day,” and we see egg-shaped Kevin in all his enraged “I need it NOW” glory. On the back cover, his friend finally gets the drift and is holding up the zero to signify none. I’d recommend this for every Pre-K, Kindergarten class and library serving those ages.
Picture Book/Board Book/Counting and Numbers   Kathie Jackson, Plymouth Meeting Friends School

Young, Cybele. The Queen’s Shadow: A Story About How Animals See. Tonawanda, NY: Kids Can Press, 2015. 9781894786607. $16.95. Gr. 3-6.
A fascinating and amazingly creative approach to teaching us the different ways creatures see and perceive the world, adapted to their habitat and needs. Cybele Young tells and illustrates the story in a fairytale fashion. The story opens with the Queen throwing a lavish ball for a variety of guests when lightning strikes, the room goes dark, and when the lights come back on the Queen discovers she’s lost her shadow. In pursuit of the culprit, we see in both illustrations and learn in sidebars how each suspected “guest” (animal) sees, and therefore could not have been the shadow thief, example: “Although it is likely that sharks cannot see color, they have a superior ability to perceive contrast.” This book would be a super fun class read aloud to enhance animal studies and research or younger audiences may enjoy as a one-on-one or small group read aloud. Exceptionally well done, highly recommended.
Picture Book/Animals   Kathie Jackson, Plymouth Meeting Friends School 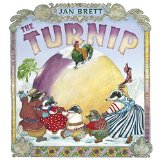 Brett, Jan. The Turnip. New York:  G.P. Putnam’s Sons, 2015. 978-0399170706. 32p. $17.99. Gr. PreK-2.
As winter sets in, Badger Girl finds a gigantic turnip in the garden. She quickly thinks of all the delicious dishes she could create. Even with the help of her family and many other animal friends, they cannot get the turnip to budge! Until a rooster with impeccable timing and some surprising help gives the final tug. Brett’s twist to this old Russian folk tale will delight your students. The beautifully illustrated and signature borders provide an imaginative sub-plot to this classic tale. I would compare and contrast it with an older version, The Enormous Turnip by Kathy Parkinson. This story will be enjoyed by adults and children alike, and is a great addition to your folktale collection.
Picture Book – Fantasy (folktale). Caroline Romano, Wallenpaupack North Primary School 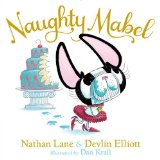 Lane, Nathan & Elliott, Devlin. Naughty Mabel. New York:  Simon & Schuster, 2015. 978-1481430227. 48 p. $17.99. PreK-2.
What do you do with a dog so adored that she gets away with everything? Mabel knows that she’s loved unconditionally by her parents, no matter how much trouble she causes. This leads to a series of hilarious events, each messier than the last. None of this bothers Mabel, a French bulldog with a lifestyle more indulgent than Eloise from the Plaza. Mabel knows exactly how naughty she is shredding newspapers, swallowing precious jewels, and wrecking havoc at the miniature golf course. Dan Krall’s illustrations are truly engaging, and let the reader see Mabel’s sweetest and stinkiest moments. This is a great book for parents to share with their children.
Picture Book – Fantasy (humor).   Caroline Romano, Wallenpaupack North Primary School