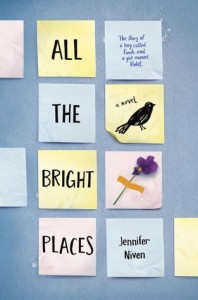 Niven, Jennifer. All The Bright Places. New York: Alfred A. Knopf, 2015. 978-0-385-75589-4. $17.99. 388p. Gr. 9-12.
Finch is in search of the perfect day.  Precariously perched on the overhang at the top of the bell tower, pondering life, he meets Violet.  Popular and beautiful, Violet is simply going through the motions, counting down the days until high school is over.  The sudden death of her sister only months earlier has left her guilt-ridden and empty — until she meets Finch.  Fates intervenes once again, and the two young scholars begin working on a school project, investigating the natural phenomena of Indiana.  They begin the “wanderings” of their great home state at first by bicycle and eventually via Finch’s minivan as he helps Violet overcome her phobia of cars due to her sister’s crash.  In the midst of discovering hidden wonders and secret niches, they discover first love, friendship and honesty.  All too soon, the dark time implodes on Finch.  His sudden disappearance crushes Violet, and since his parents’ apathy won’t involve the authorities, she attempts to move on.  She’s fairly successful until an ominous phone call from his sister and a coded email from Finch impel Violet to become involved in his rescue.  Racking her brain to make sense of the message, she begins a frantic and earnest search for Finch.

Told in alternating voices, Finch and Violet are reminiscent of Eleanor and Park.  The honest portrayal of teenage angst and manic behavior will stay with the reader long after the final word has been read.  Look for the movie starring Elle Fanning.

Not often does a book come along that makes a reader feel as though the characters are people they have met. Violet Markey and Theodore Finch meet at the most unlikely place – at the top of the bell tower where they are both thinking about jumping.  Finch is credited with saving Violet and continues to enter her life in the most unexpected ways. After years of knowing Finch as the outcast because of his borderline behavior, Finch has a hard time socially.  In social studies class, he volunteers to be Violet’s partner in a project detailing the lost unique places of Indiana. Finch is not the only one who has dysfunction in the family.  Violet’s parents are loving and involved, but dealing with the sudden death of their other daughter, Eleanor, from a car accident. Through the project, Violet and Finch find each other and support one another until Violet begins to identify the demons Finch is battling and the help she needs to ultimately help him.

Get your tissues ready.  This novel encompasses the definition of mental illness and the people it affects. Niven creates characters who exemplify the suicide victims and survivors. An inside look at the effects absent and present parents can have on teens struggling with mental illness. An excellent resource list of places to seek out help as a teenager and a parent.  When finished, this book is one filled with raw emotion. Told from alternate points of view, you see how Finch and Violet could experience the same feelings while being totally different. Definitely one readers will read over and over.