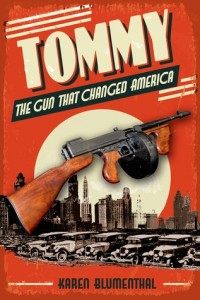 During WWI, John Thompson began developing the Thompson submachine gun in order to assist American soldiers engaged in trench warfare.  Because the war ended before development was complete, however, Thompson and his associates had to find a new market for what became known as the Tommy gun.  They instead promoted the gun as a protective weapon for police, military men, bankers, and other big business owners.  Although sales flyers insisted that the Tommy gun was “on the side of law and order,” the fact that there was little regulation of gun sales meant that Tommy guns soon fell into the hands of gangsters and criminals.  Set during the turbulent 1920s and 1930s, this book is chock-full of photographs and exciting stories about several notorious historical figures, including Al Capone, George “Machine Gun” Kelly, John Dillinger, Baby Face Nelson, and J. Edgar Hoover.  An excellent addition to any social studies curriculum, the book includes a thorough bibliography of sources for further research and takes a careful look at the way the Tommy gun impacted society and triggered a debate about gun control that continues today.

This book is very well-written and reads more like a thriller, especially during the chapters that focused on famous American gangsters, than nonfiction.  I could see the book appealing to boys looking for a “cops and robbers” story.  It will also appeal to history buffs and gun enthusiasts.  Written in easily accessible language and containing many primary source photographs, this book is well-suited for lower-level and reluctant readers as well.  It is definitely a must-have addition to U.S. history collections!