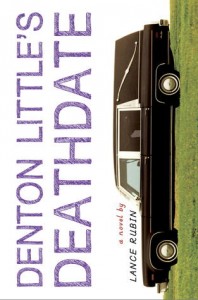 Denton Little has had his whole life to prepare for his death at age 17.  Thanks to advanced DNA technology, almost everyone knows the date on which they will die — but not the time or how.  Denton’s always vowed to live a normal life in spite of his early deathdate, but as it approaches, he finds that isn’t going to happen.  There’s a complicated love triangle between his girlfriend and his best friend’s sister.  There’s a purple splotch on his leg that is spreading at an alarming rate.  There’s a mysterious stranger who shows up at his funeral (held the day before his death) to warn him to “be careful.”  And he suspects there are secrets about his mother, whose deathdate was his birthdate, that his family hasn’t been telling him.  Denton’s hilarious outlook and the rapid pacing will hook students.  A cliffhanger ending promises a sequel.  Recommend to fans of John Green, as Rubin’s characters possess a similar brand of humor and friendships.  John Corey Whaley’s comic science fiction novel Noggin and Neal Shusterman’s page-turning Unwind series would make great pairings.