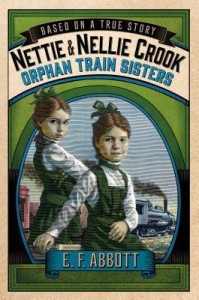 Nettie and Nellie were twin girls in a poor New York City family around the turn of the century. When just five years old, they were told their mother did not take care of them, and the girls were taken to an orphanage and separated from their brother. Finding it hard to adjust, Nettie and Nellie sought comfort in each other and learned the stories of the other children, while they are forced to work. Without warning, the girls were told to put on new dresses and get on a train. They were then taken out West where all the children from various care societies were put on a stage and shown off to possible adoptive parents. Nettie and Nellie were taken in by a childless couple and made to work around the house and store.  THOUGHTS: A very interesting book about a period in time not many know about. I love the non-Fiction aspect of it! There are historical photographs and pictures throughout the book depicting scenes and items (a coal scuttle for example), so the reader is given a better sense of what it was like.