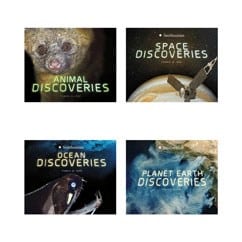 Written in conjunction with the Smithsonian, these books introduce children to some amazing discoveries made by scientists in recent years. This reviewer had the opportunity to examine the Animal Discoveries volume. This title presents information about discoveries of unique animals around the world. The hog-nosed rat, the ghost ant, the olinguito, and peacock spiders are just a few of the species readers will discover. Not only will readers learn basic information about the animal (characteristics, habitat, etc.), but they will also learn about how scientists discovered each species. Text boxes spotlight additional unique facts about each animal. Numerous high-quality photographs supplement and enhance the text. 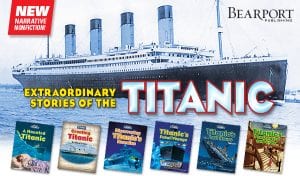 The story of the doomed Titanic and her passengers has fascinated the public ever since her sinking in 1912. The six volume Titanica series examines the history of this majestic vessel, from her initial conception and construction, to her fatal voyage, her sinking and the discovery of the ship’s wreck. Each volume focuses on a specific aspect of the Titanic story, examining and explaining it in detail. Extensive illustrations, charts and photographs as well as fact boxes accompany the text. For example, Titanic’s Passengers and Crew features photos of the passengers and crew aboard, as well as illustrations depicting what life was like on board. Infographics reveal the survival rates among the different classes of passengers.

THOUGHTS: Sure to be a hit with Titanic fans, this engaging and easy to understand series is a worthwhile addition to library shelves. Recommended for both the casual reader and the Titanic researcher. 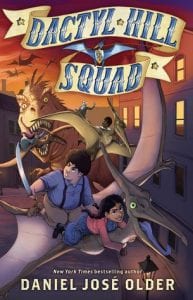 The action never stops with this delightful historical sci-fi adventure. Set in Civil War era New York City, Magdalys and her friends from the Colored Orphan Asylum are on an outing to the theater when they get caught up in the Draft Riots of 1863. As the theater goes up in flames, the orphans are rescued by two of the actors and spirited out of town, finding refuge in the Dactyl Hill neighborhood of Brooklyn. The name references the many pterodactyls that fly around the area, because in this story, dinos roam the streets of Manhattan, serving as transportation and weaponry. Magdalys and her friends quickly get caught up in the underground resistance movement, and aid their new friends in stopping the evil Richard Riker from selling the rest of the orphans back into slavery. This mashup of history and sci-fi produces a book you can’t put down. Magdalys is a sassy, spunky heroine that readers will root for, and Older provides enough historical basis to pique the reader’s interest. No punches are pulled as he describes a lynching that results from the violence of the draft riots. Copious notes and glossaries provide background information and historical context.

THOUGHTS: This book is sure to be a hit with middle grade readers, who will cheer to learn it is the first in a series.

What if dinosaurs never went extinct? Older reimagines an alternate history, set during the Civil War, where dinosaurs roam free and are used in battle. Magdalys is a Cuban-born orphan in New York City, growing up at the Colored Orphan Asylum. She and her brother were left there by a strange man, but Magdalys and the other orphan’s personal records are sealed, so their backgrounds are a mystery. While on a field trip to the theater, the Draft Riots break out, and Magdalys and her friends barely escape as the theater burns to the ground. During their escape, the orphans are pursued by the evil Magistrate, Richard Riker, and Magdalys thinks she might be able to communicate with dinosaurs. Taken in by the Vigilante Committee in Dactyl Hill, Magdalys and her friends must work to fight Riker while discovering their mysterious past.

THOUGHTS: An interesting alternative history that will appeal to middle grade readers. Many of the areas, people and events are historically accurate, which could be fun to explore in history class. Older also explores civil rights issues and how racial discrimination affected to many adults and children at the time – and can echo throughout America today. A fun, yet thoughtful addition to your middle grade collection. 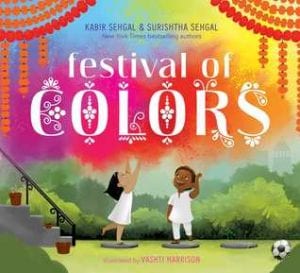 This vibrant book introduces Holi, the Indian festival of colors. The young characters of Chintoo and Mintoo walk us through the preparations leading up to the big day: gathering the bright flowers, drying the petals, and pressing them into colored powders. These powders give this happy day its name. On the big day, the colors are gleefully tossed at friends and family, celebrating “fresh starts…friendship…forgiveness.” The explosion of color in this book tells as much of the story as the sparse text, leaving readers smiling at such a exuberant celebration. 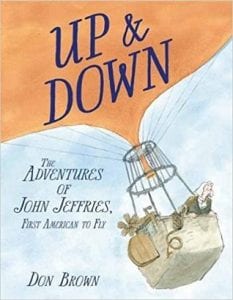 While most people know the Wright brothers as the first Americans of flight, this charming book tells the story of Dr. John Jeffries, the first American to fly. Over 100 years before Kitty Hawk, Dr. Jeffries, an amateur meteorologist, and his partner, French balloonist Jean-Pierre Blanchard, made the first balloon flight over the English Channel. Jeffries, an American who backed the wrong side in the Revolutionary War, was living in London in when he met Blanchard and accompanied him on a flight to collect weather data. The two later set their sights on a cross-channel flight, completing it in January 1785. Brown pairs his whimsical illustrations with researched, annotated text to detail the events of this flight. An endnote adds additional historical context, and Brown also provides a bibliography and sources for the noted quotations as well as a short Author’s Note. 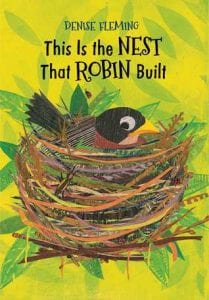 Denise Fleming never disappoints, and This is the Nest is another quality offering. Vibrant illustrations and singsong rhymes tell the springtime story of robin building her nest, “with a little help from her friends.” Creatures from squirrel and mouse to pig and  horse and others all contribute bits and pieces that robin uses to construct her nest, in which she lays her eggs and raises her fledgelings. After a glorious fold-out spread that recaps the process, Robin gently nudges her babies out of the nest, to being their own lives. The illustrations are crafted by a combination of collage and gel prints, a new technique for Fleming; a detailed explanation of the process is available on her website, along with activities paired with the book.

THOUGHTS:  A great storytime book, or perfect to peruse one on one, enjoying the delightful illustrations. 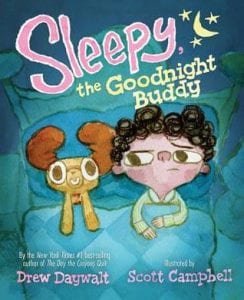 Like many kids, Roderick hates bedtime. He is always trying to come up with ways to put it off, such as asking for a glass of water or asking for another story. In order to help him get to sleep, Roderick’s parents decide to give him a goodnight buddy. Roderick soon gets a taste of his own medicine, however, as his goodnight buddy has all kinds of requests, questions, and complaints. By the time his bedtime buddy is through with all of his demands, Roderick is exhausted–maybe even exhausted enough to finally go to sleep. Read this comical story, told mainly through dialogue between Roderick and his bedtime buddy, to discover whether or not Roderick’s goodnight buddy finally helps him get to sleep.

THOUGHTS: Fans of Daywalt’s popular The Day the Crayons Quit will delight in his newest release. In fact, The Day the Crayons Quit even makes an appearance in this book, as Roderick reads it to his bedtime buddy. This title is an appealing bedtime read, as many children and parents will be able to relate to the fight against bedtime–and perhaps even have a chuckle or two about it. English teachers might find this a useful and entertaining way to introduce dialogue in writing. Overall, this title will appeal to a diverse audience for reasons aforementioned, and is definitely worthy of consideration for purchase. 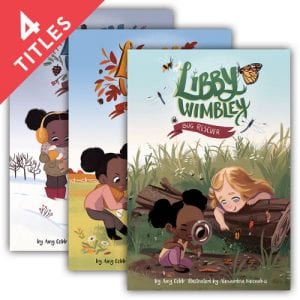 Libby Wimbley is a go-getter who loves outdoors and exploring her world. In this first set of Easy Reader books (a second set is on the way) a bright girl (and sometimes her friends) have adventures, mostly surrounding animals and their habitats. From bugs to birds to goats, Libby is ready to make the world a better place!

THOUGHTS: I’m so excited to find an Easy Reader book where the main character is an African-American girl! My students have been excited about books that reflect them in all their many facets (gender, skin-color, hobbies, etc.), and Libby is a full of curiosity and spunk. 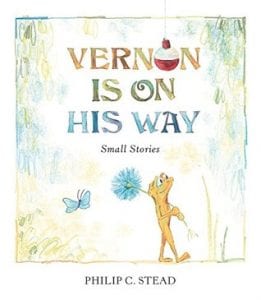 Stead’s latest book is part easy reader, part picture book and contains three chapters. Vernon, the toad, is featured in each chapter. In “Waiting,” Vernon is waiting impatiently, and the reader sees him smelling flowers and resting on a shell. After a time, the snail inside the shell shows himself, and Vernon climbs on top and goes for a ride, dragging a fishing pole float along with him. In “Fishing,” Vernon goes to the river to fish along with his friends Skunk and Porcupine, although none of them knows how. They see a fish jump out of the water and say hello and feel they have accomplished their goal. In “Gardening,” Vernon is searching for his friend Bird and looks for him in the forest and near river but falls asleep while watching the clouds without finding him. Vernon’s friends try to cheer him up by adding interesting objects to the toad’s garden. These characters appeared in an earlier book A Home for Bird, although Bird never appears in this book. The story is peaceful and contemplative, and there is not much action. It is interesting that the only character who has a name is the title character. Stead’s illustrations are done in gouache, chalk pastel, crayon, and charcoal and are the starring element in this text. Young readers will enjoy poring over the drawings to find the objects, like the floater and the butterfly, in each chapter.

THOUGHTS: This book is best suited for readers who enjoy a quiet story. Purchase where Stead’s books are popular.