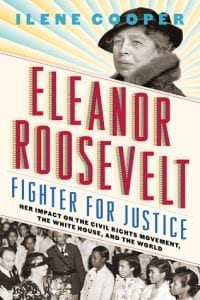 This biography of Eleanor Roosevelt examines her life and accomplishments, with particular emphasis on her work and advocacy for social justice. Early chapters trace Eleanor’s lonely childhood, marriage to Franklin Roosevelt, and her growing political power as the wife of a prominent politician. A large portion of the book focuses on her advocacy for various causes during her time as First Lady. Roosevelt advocated publicly (as well as privately with her husband and other government officials) for numerous causes including civil rights, women’s rights, and children’s rights during the Depression and World War II years. Cooper also examines Roosevelt’s evolution on social justice issues. Due to her privileged upbringing, Roosevelt could occasionally be naive or insensitive about some topics. Over time, however, she learned to listen, learn, and more fully understand the struggles many Americans faced on a daily basis. Roosevelt’s post-White House years, during which she served as a delegate to the United Nations, is also discussed. The text is enhanced by the inclusion of numerous photographs.

THOUGHTS: This biography deserves a spot in your collection. Not only for researchers, this title will be of interest to history buffs and students interested in social justice and change. 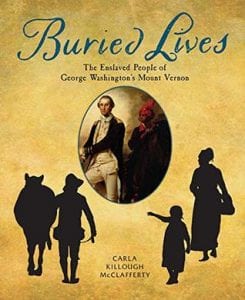 George Washington, the hero of the American Revolution and the first President of the United States, was a lifelong slave owner. He inherited his first slaves at the age of eleven and at the time of his death, 317 slaves lived on his estate. Clara Killough McClafferty explores the world of Washington’s slaves by relating the lives and experiences of six: William Lee, Christopher Sheels, Caroline Branham, Peter Hardiman, Oney Judge, and Hercules. McClafferty relies on extensive research, including numerous primary source documents as well as Washington’s own words to describe life at Mount Vernon and the Presidential residence, as well as explaining the role of six within the household and what their everyday life may have been like. The text is supplemented by numerous images, diagrams, maps, and primary source documents. Photos of present day interpretive displays at Mount Vernon also help to illustrate what life may have been like for those on the plantation. The closing chapters of the book examine what happened to Washington’s slaves after his death as well as a discussion about the ongoing work at Mount Vernon to remember the people enslaved there and the archaeological work currently taking place to locate the final resting places of those who were enslaved on the estate.