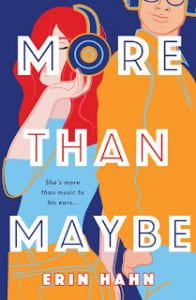 Luke has been reading Vada’s music blog, secretly commenting on it (and crushing on her) for three years. Vada’s also been falling asleep listening to Luke’s “deep, lyrical, and crisp” voice on the podcast he records with his brother… in the studio above the Loud Lizard, the bar where Vada works, which happens to be owned by her mom’s boyfriend and former drummer, Phil. Of course neither of these introverted music nerds have the guts to talk to each other even though they go to the same school and see each other regularly at the Loud Lizard. That is, until Vada’s dance class and Luke’s music composition class get paired together for the end-of-the-year spring showcase. Luke finally takes a risk and offers to partner up with Vada to compose a song for her dance performance, which seems like it might be the end of the story. They’re going to fall in love now, right? It’s not that simple when Luke is hiding his love for composing music from his dad, a former British punk rock star who wants Luke to follow in his footsteps. Luke has no interest in performing – just composing – and to avoid the pressure from his dad entirely, he hides the fact that he even plays music at all. Vada has obstacles of her own. Her mostly absent (also former musician) father only shows up to drink himself stupid at the Loud Lizard, and when he says he’s not helping her pay for college, Vada has to figure out a way to make her music journalism dreams come true on her own. Working at the Loud Lizard and having easy access to concerts helps, but the Loud Lizard is just barely surviving financially. Enter the power of music.

THOUGHTS: Flirting via lyrics? Yes, please! While I think anyone can appreciate this adorable love story whether you know the bands mentioned or not, contemporary music lovers will find themselves swooning over this book. There’s even a user-created playlist on Spotify made up of all the songs mentioned! Highly recommended for any YA collection. Put it in the hands of anyone who loves music.