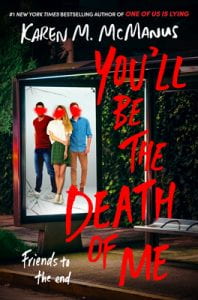 Ivy, Cal, and Mateo used to be friends, but then high school happened.  Now in their senior year, things aren’t quite going as they had hoped.  After losing the senior class presidential election, Ivy doesn’t want to be at school to hear the winner’s speech. Cal was stood up for a breakfast date, so he’s not in the mood for school, and Mateo’s just in the right place at the right time. Cal suggests the three recreate “The Greatest Day Ever” when they skipped a class field trip in Boston, and they agree. Once in Boston, the three end up following another classmate, Boney Mahoney, into an abandoned warehouse where Ivy finds him dead. Caught up in a murder-mystery, with Ivy as the prime suspect (according to all of the gossip and “news” reports), the three try to figure out what happened and how to get out of this mess. Things only get worse as history is revealed and current situations are realized.

THOUGHTS: Although it started out slow, You’ll Be the Death of Me keeps the reader questioning what they know and don’t know. Ivy, Cal, and Mateo are all unreliable narrators who continually hide information from one another leading to more mystery beyond the death of Boney Mahoney. This title will fly off the shelves with all of McManus’s books.