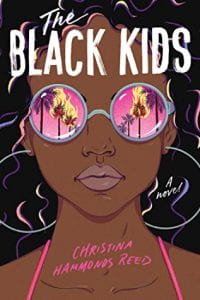 Los Angeles is in flames after the police officers who beat Rodney King senseless are acquitted. These events of the early 90s have an intense, life-changing effect on native Angelinos and upper middle-class African Americans, Ashley Bennett and her older sister Jo. As Christina Hammonds Reed’s relatable narrator, the popular, thoughtful Ashley, nears graduation, she starts to view her childhood (white) friends differently, a situation exacerbated by the local disruptions. Her teenage stresses about college acceptances, parental conflicts, and illicit flirting, pale once the riots start and her rebellious sister Jo drops out of school, marries, and protests the verdicts. Ashley has lived a privileged life pampered by the family’s Guatemalan housekeeper, Lucia, and indulged in every material way. Now, her father’s family-owned business–run all these years by his brother– is in ruin, bringing her uncle and her cousin to the Bennetts’ doorstep. When Ashley connects with the kind, charming basketball star, LaShawn Johnson who attends the elite prep school on scholarship, and the off-beat Lana Haskins who is possibly a victim of physical abuse, she questions her friend choices and wonders why she has no Black friends. When Ashley inadvertently starts a rumor at her school that gets LaShawn suspended, she finds it difficult to rectify the situation; but it makes her reflect on the inequity in the lives of people of color. Her sister’s mounting militancy finally gets her arrested and sentenced, though she was just one of the crowd of protestors when someone threw a Molotov cocktail setting a fire. Ashley becomes accepted by the Black kids at school and discovers she can widen her circle of friends. More importantly, the Bennett family grows better at communicating with each other and, in doing that, they realize they care deeply about each other. Christina Hammonds Reed takes a coming-of-age story set in the early nineties against the backdrop of the Rodney King beatings to a new level. The relationships, tension, and plot development as well as the cultural references and dialogue draw in the reader. In particular, Reed’s writing style is fresh and exact, giving a unique take on the typical high school tropes—mothers vs. daughters, siblings, popularity, the future, romance, self-discovery –thus making The Black Kids a compelling read.

THOUGHTS: Recommend this title to high school students who liked Karen English’s middle grade novel, It All Comes Down to This that told of the Watts riots, and lead them to Ana Deavere Smith’s one-woman show featuring the players in the Rodney King beating and its aftermath, Twilight: Los Angeles, 1992. Activism and passivity are shown in the two sisters and students can discuss these divergent characters. The difficulty separating from childhood friends or the desire to be seen in a different light as one matures is a strong theme in this book. Though the elements of the story are not uncommon, Reed’s gifted writing style pulls you into to the book.

Step back into the early nineties in LA for a coming of age story that could easily situate itself into the current landscape of America (without social media and cell phones). Main character, Ashley lives a pretty posh life, removed from the hardships her parents faced growing up and even from a lot of the current events. She attends a private school with a lot of white friends and lives in a respected neighborhood. When the Rodney King trial and subsequent riots take over the city, Ashley’s world starts to shake, and she’s forced to reckon with questions of identity. From the shift from child to adult, Ashley’s experience provides the foreground to the city of Los Angeles during a fragile moment in US history.

THOUGHTS: This book should replace some of the dusty “classics” taking up room on high school shelves. Although suitable for high school students, there is mention of drugs, alcohol, and self harm.