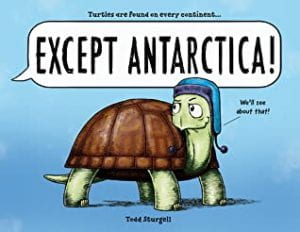 When an unseen animal fact writer shares that turtles are found on every continent except Antarctica, one bold turtle sets off to prove him wrong. Along the way, he befriends an owl and a dung beetle who also live everywhere except Antarctica. They too join the turtle on his quest to reach the frozen continent. Soon, a snake, a mouse, a bee, and a frog join in, determined to prove the fact writer wrong and show that they are indeed found in Antarctica. The band of unlikely friends ultimately reach their destination, only to discover that the bitter temperatures, howling wind, and frozen conditions are not their ideal habitats. While in Antarctica, the fact writer mentions how penguins are only found here, and the final pages show one indigent penguin diving off an iceberg in hot pursuit of the turtle and his friends. Several pages of backmatter round out the title and provide additional facts about each featured animal. A section titled “Animals of Antarctica” highlights the continent’s native species, and a section called “The Frozen Continent” details the region’s extreme weather conditions. Also included is Information about how Antarctica is designated as a scientific preserve and a map of each country’s scientific research stations. The book’s final pages discuss climate change and share ideas about how readers can help make the world a better place, including ideas for recycling and planting trees.

THOUGHTS: Imaginative illustrations, witty dialogue, and a conversational writing style will hook students from page one. They will laugh at the animals’ silly interactions and the fact writer’s frustrations as he tries to keep the book on track. This will be an engaging introduction to units about animals’ habitats and the differences in biomes around the world. 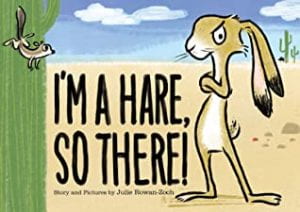 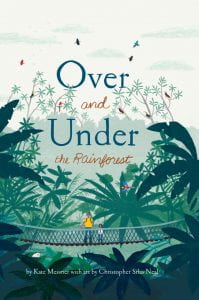 Following up Over and Under the Snow and Over and Under the Pond Messner explores the rainforest both high and low. Christopher Silas Neal’s artwork, overwhelming the pages in luscious saturated shades of green, draws the reader into the forest along with the young narrator and her guide. Above is a world of monkeys, insects, and birds. Colorful toucans, flit among the branches. Capuchin and howler monkeys and sloths move through the leafy growth. Below are critters and creatures, both cute and deadly: agoutis and crocodiles, anteaters and spiders. As the day wanes, the rainforest fades to purples, creatures of the night emerge, and the young narrator heads for home, Abuelita and supper. Messner’s informative text never overwhelms the reader. Facts are lovingly wrapped in description to evoke life in the rainforest.

THOUGHTS: Messner never disappoints, and this book will be a solid addition to any elementary collection, useful as a read-aloud or with a classroom curriculum.