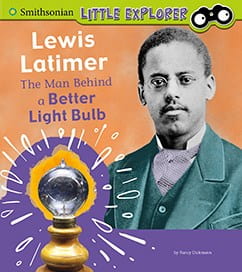 In the 5th book of this series, Lewis Latimer: The Man Behind a Better Light Bulb, readers meet an inventor they may not have heard of before. Lewis Latimer, the son of escaped slaves, became a draftsman by reading books and teaching himself how to use drafting tools. He was so talented that many famous inventors of the time sought out his help when drawing and fixing their designs. Because of Latimer, Alexander Graham Bell was able to turn in the paperwork for the telephone patent just hours before another inventor. Perhaps his most famous invention is a better light bulb. He created a filament that lasted much longer and was more cost effective. Thomas Edison, inventor of one of the first practical light bulbs, was so impressed with Latimer that he hired him as an engineer for his company. Latimer was the only black person on Edison’s team, a huge achievement.

THOUGHTS: This book belongs in every elementary library biography collection as many of them most likely contain many books about white male inventors. This biography shows a refreshingly different view of who an inventor can be and where they can come from. Latimer, like many black inventors of his time, has been overlooked. Latimer’s lifetime is not just filled with educational achievements. The obstacles he overcame during his life are just as inspirational: his family escaped slavery, he fought in the Civil War against the South, and he studied law in his later years at a time when not many black people were able to do so. Latimer’s legacy is one of hard work and risk-taking, and it should be shared with young students who hope to be like him one day.

These scientists and inventors saw problems in their world and found ways to solve them! From electricity to lightbulbs, robots to super soakers, these figures in history were able to be inventive and look for different solutions to different problems. This series provides readers with great information and historical photographs to engage readers and allow them to take a step back through history, solving the problem with the scientist or inventor.

THOUGHTS: Although I only had one item in the series, Grace Hopper, I enjoyed the information the book provided. This series is stated as a Gr. K-3 series, but I believe it would be better enjoyed and understood by readers in grades 2-4.