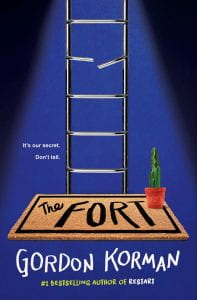 After a violent hurricane rips through their town, Evan and his friends decide to explore the destruction and see if their fort in the woods has survived. Unfortunately, the fort is destroyed, but the weather has unearthed something even better not too far away. The boys discover an underground bomb shelter, complete with canned goods, a record player, a TV – basically everything they need to make the ultimate clubhouse! The group decides to keep the fort a secret between the five of them. They hang out at the fort quite often, spending a lot of time with each other; however, each of them is hiding another secret besides the fort. Evan is worrying about his older brother and hoping he doesn’t succumb to drugs like their parents. Jason is trying hard not to reveal the fort to his girlfriend and her police officer father. Mitchell is trying to get his OCD under control. And CJ is sleeping at the fort every night to escape physical abuse from his stepdad. Ricky, who has not known these guys as long as they have known each other, knows something is amiss and begins to put the pieces together, determined to help them out. When some older boys get suspicious about where the friends are spending their time and an investigation begins, Ricky knows he has to work quickly to keep his friend group (and the fort) safe.

THOUGHTS: Gordon Korman’s 100th book does not disappoint. Each chapter is told from the point of view of a different character to get everyone’s perspectives. The friendship between the boys is heartwarming and supportive, especially in the face of the obstacles they all have in their lives. This book is a must-purchase for middle grade libraries.