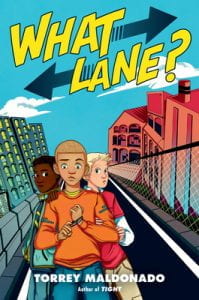 Biracial Stephen pals around with his white friend Dan in their gentrified Brooklyn neighborhood, but lately, Stephen is noticing he is viewed more negatively by the janitor or passers-by than his paler friend. Dan is sympathetic and though he is oblivious to the harsher treatment Stephen gets as they course around their city streets, he doesn’t deny his friend’s feelings and tries to understand. Dan’s cousin Chad who recently moved nearby and drops over frequently is the opposite. Author Torrey Maldonado depicts Chad’s parents as more into their phones and social lives than the well-being of their son and has them voice micro-aggressive remarks about Stephen. Chad challenges Stephen and his white friends to some dangerous pranks; and Stephen fears, rightfully, that if the group gets caught, he’ll get the blame. His African-American dad counsels him with “the talk” warning him how to behave if stopped by the police, though his white mother thinks eleven-year-old Stephen is too young to lose his innocence. Stephen’s Black friend Will shares the same cautions as Stephen and agrees that Chad is up to no good and questions Stephen’s closeness to his white friends. At a basketball game, Stephen purchases a bracelet that says, “What Lane?” to remind him of a basketball star that could play all the moves. A thoughtful person, Stephen struggles with the different groups and decisions around him. When Chad plays a hurtful trick on Stephen, Dan and his other white friends are allies and call out Chad’s bad behavior; Will and his friends come to Stephen’s rescue. In this coming-of- age novel for young middle school students, a likeable, relatable Stephen trusts he can enjoy the friendship of all different kinds of people and is able to fit into all types of worlds as long as he is true to himself.

THOUGHTS: A teacher himself, Maldonado has a great ear for middle school dialogue and a keen eye for capturing middle school dynamics. This book can be a relevant read aloud for all children but particularly relatable to children of color. It brings up some delicate but real situations that would encourage healthy discussion (for example, when Dan and Stephen are play fighting, an older white lady assumes Stephen is attacking Dan). I think it is a must buy.