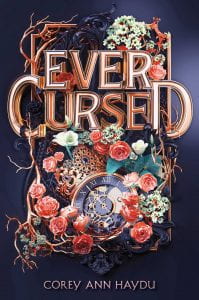 Five princesses have been cursed, the queen is trapped in a glass box, and the spell is almost turning true. Jane, Alice, Nora, Grace, and Eden have all been cursed by a young witch to be without something: food, sleep, love, memory, and hope. Jane, the oldest, has been without food for five years, and the sisters finally have the opportunity to break their spell before it turns true and becomes permanent. Jane and her sisters are forced to work with the young witch, Raegan, who cursed them five years ago. To break the spell, they must collect a clock from the oldest, a tear from the saddest, a lock of hair from the most beautiful, and a crown from the richest. But, the kingdom of Ever is under a spell far more threatening than any cast by a witch, and the sisters soon discover the terrible truths about their own kingdom and the one person they thought they knew best.

THOUGHTS:  Although Ever Cursed appears to be a fairy tale, this is mainly a book about sexual assault and the abuse of power, and their patriarchal world is not so unlike our own. The beginning of the book includes a content warning for readers explaining that this book may also be triggering for anyone who is currently or previously struggling with an eating disorder. Overall, the strong, female characters in this book have to come to terms with some hard truths, but they are able to work together to expose the real evil plaguing their kingdom.