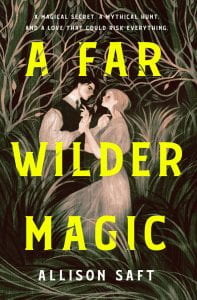 Margaret Welty spends most of her time living alone with her dog, Trouble. Her mother, a famous alchemist, spends most of her time traveling, away from home. Weston Winters is desperate to become an official alchemist, and when he arrives at the Welty house looking for the famous alchemist to become her apprentice, Margaret strikes a deal with him: she will allow him to stay until her mother returns if he agrees to join her in the annual hunt to kill the legendary Hala, a mythical and deadly fox that stalks the town until the hunt begins. Margaret knows she has a great shot, but she needs an alchemist as a part of her team in order to enter the competition. These two strangers soon find that they are drawn to each other and have more in common than they know. As the competition looms closer, so does danger, and together they must learn to trust each other in order to survive.

THOUGHTS: This unique, stand alone fantasy takes place in a made up world influenced by the culture and lifestyle of the 1920s. Although fantastical, the story also tackles more serious and relatable issues like prejudice and racism. Readers will be drawn into Saft’s world and the slow romance that builds between Margaret and Weston and the connection they have as outcasts in their communities. 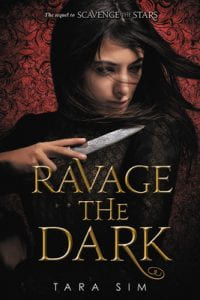 Amaya has had a hard life, and seven years of it was spent imprisoned on a ship. After paying her debt and earning her freedom, Amaya posed as a countess to bring down the men who take children away from their families as debt payment, but when she was betrayed by the man she thought was a friend, she swore she would have her vengeance. While posing as a countess, Amaya met Cayo Mercado, and although they have their differences, the two must work together to discover the origin of a mysterious plague ailing Cayo’s sister and it’s connection to the counterfeit coins circulating Moray and the surrounding nations. Together they uncover secrets, fight corruption, and discover that amid the chaos, they may also have feelings for each other.

THOUGHTS:  The first book in the duology, Scavenge the Stars, was loosely based upon the plot of The Count of Monte Cristo, and this sequel has just as many twists and turns that will keep readers intrigued until the very end! I’d recommend this book to readers who enjoy action, adventure, and plot twists.