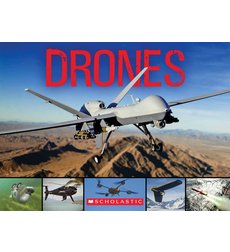 Within five minutes of setting this book on my counter, I already had several holds! Drones goes through several different types of drones, included military, civilian, and underwater drones. Every two pages describes a specific type of drone within the subset and includes amazing photographs and pictures of each. Other information includes the distance the drone is capable of flying and how long it can fly before needing to recharge. Each page includes graphics on the size of the drone in comparison to a school bus, a human being, or another recognizable object. While it does not contain large amounts of information, this book flies off the shelf because the topic is so intriguing for middle-schoolers, especially boys!
623 Drone Technology     Nicole Starner Biglerville HS/Upper Adams MS