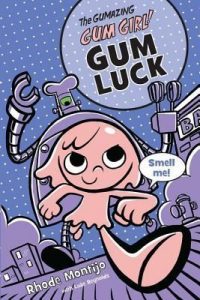 This is the second book in the illustrated novel series The Gumazing Gum Girl!  Gabby Gomez turns into Gum Girl by chewing bubble gum.  As Gum Girl, Gabby possesses superpowers and performs feats like stopping a car from careening into her school and helping a plane with a damaged wing to land. Unknown to Gabby, she has an archenemy named Robo Chef, who is determined to defeat her.  He robs a bank, and it is up to Gum Girl to save the town. This is a slight story with a limited word count, but has the humor and word play that will appeal to young and struggling readers. The characters are Hispanic and a few Spanish words are contained within the text. Robo Chef, hiding in a spatula factory, is an evil hapless character who cannot seem to catch a break.  The illustrations by Luke Reynolds are done in a cartoon style. The characters are drawn on a large scale and there is heavy use of the color pink. As if there is not enough silliness, the book has a bubble gum smell and the font style is Grilled Cheese BTN Condensed. THOUGHTS:  Even though Gum Luck is not a Newbery contender, its off the wall style will make it likely to fly off the shelves.  A suggested purchase for elementary libraries, especially if the first book is popular. 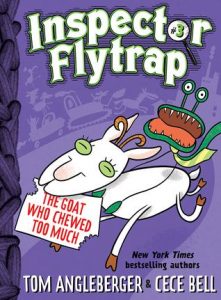 Inspector Flytrap seeks to become the World’s Greatest Detective, so he will only take the world’s Greatest Mysteries. However, detective work can be challenging when you’re a potted plant. After a multi-million dollar golden pickle paperweight is stolen, the inspector is on the case, aided by his trusty assistant Nina the Goat. But when Nina is arrested for the crime, Inspector Flytrap (movement-challenged now that Nina is in jail) must find the true criminal in order to free Nina. THOUGHTS:  Typical silliness from Origami Yoda Master Angleberger with plentiful illustrations by Bell (El Deafo). A satisfying mystery for the emerging reader. 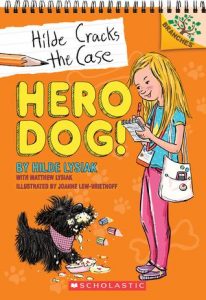 Hilde, the pint-sized editor of the Orange Street News, is always on the lookout for a breaking story. In Hero Dog! she finds herself involved in a series of thefts or sabotage to entrants of the Bake-Off Bonanza. Next, Bear on the Loose! finds Hilde trying to verify reports of a bear in her hometown of Selinsgrove, PA. In both instances, Hilde’s reporting skills lead her to asking the questions that solve the mysteries. Written by the real-life reporting team of Matthew Lysiak and his daughter Hilde (who really does write the Orange Street News for Selinsgrove, PA) these entertaining Hilde Cracks the Case mysteries are both a satisfying detective story and an introduction to reporting skills and techniques. Plentiful illustrations by Joanne Lew-Vriethoff (and a cute faux spiral bound notebook cover) add to the appeal of the books. THOUGHTS: Show student the website for the Orange Street News and you will quickly create reporters-in-training. A good addition to the early chapter book collection. 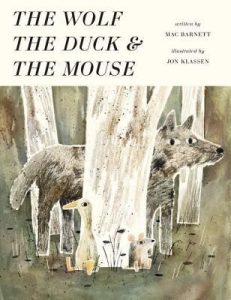 When a mouse is swallowed by a wolf, he thinks it’s the end of the line. But, it turns out, it’s just the beginning of his adventures. In the wolf’s belly, the mouse meets a duck. The duck explains that they might have been swallowed, but he has no intention of being eaten. Instead, from inside the wolf, the pair enjoy tasty home-cooked meals and dance parties, all without the ever-present fear of predators that nagged them before. Life is good until the wolf experiences a bellyache. His moans attract the attention of a hunter, and when all of their lives are in danger, the mouse and the duck decide they need to intervene.  Jon Klassen’s muted mixed-media illustrations are the perfect compliment to this subtly funny story, and readers will laugh at all the items mouse and duck find inside the wolf. Fans of this duo’s previous collaborations, including the Caldecott Honor winners Sam and Dave Dig a Hole and Extra Yarn, will eagerly devour this latest offering.  THOUGHTS:  This original pourquoi tale will be a wonderful addition to storytimes, and it will very likely fly off elementary shelves. 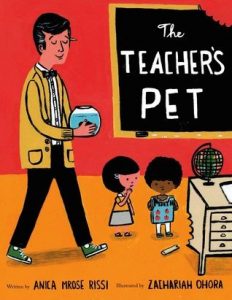 Mr. Stricter has always dreamed of having a pet, so he’s very excited when the science projects hatch. Each student monitors the growth of one tadpole, and when they’re grown, they release all the projects into the wild: all except one. Bruno, the last one to hatch, had been the smallest, but as he devours everything in sight, he grows, and grows, and grows. The students quickly realize Bruno is a hippo, and his size is troubling, but Mr. Stricter is blinded by love and is oblivious to any problems. Even as Bruno smashes desks, chomps textbooks, and snores during silent reading, Mr. Stricter declares his love for the class pet. It isn’t until Bruno swallows Mr. Stricter whole that the class is forced into action to get their teacher back.  THOUGHTS:  This title will make a wonderful read-aloud thanks to the witty restraint the author uses. The word “hippo” never appears in the book, but students will immediately notice what Mr. Stricter does not: Bruno looks different from the other tadpoles. The bold acrylic and pencil illustrations shine, extending the text and allowing Bruno’s larger-than-life personality to take center-stage. This will be a good match for science units about watching animals hatch and grow. 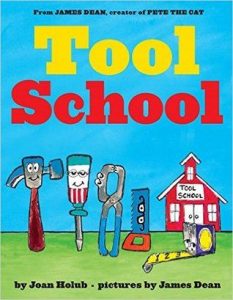 Five little tools, hammer, screwdriver, tape measure pliers and saw, head to school. Each is eager to display his or her skills but find working alone doesn’t produce very good results. Ms. Drill, their teacher, encourages them to cooperate, yielding better results. Bouncy rhyming text with bold illustrations by James Dean (Pete the Cat) make this a perfect workshop introduction for the tiny tool time set. Cool tool tips are included after the story.  THOUGHTS:  This would be a great introduction to a primary maker-space experience, promoting creativity and cooperation. 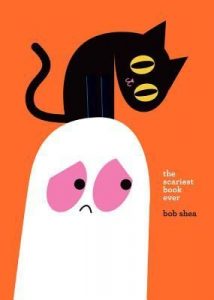 Boo! A tiny ghost tries everything to avoid going into the scary woods, from spilling orange juice on himself (drat, he has to take his sheet off) to a bellyache, to convincing the reader that he can be scary right at home. Meanwhile, the reader is apparently reporting back what horrors lurk in the woods – bunnies! Woodland creatures! Doughnuts! Eventually the little ghost is convinced to go into the woods, where he finds a costume party. Shea’s familiar-style illustrations (Ballet Cat, Buddie and the Bunnies) add to the humor of the little ghost trying to convince us he is brave and scary. THOUGHTS:  Youngsters will giggle wildly over the silly juxtaposition of thought and image, as the little ghost tries to be brave but is so obviously afraid of the unknown in the woods.