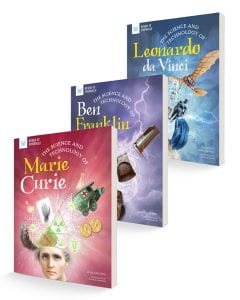 Knutson’s book on Marie Curie showcases Curie’s intelligence and scientific contributions, while encouraging readers to try their own scientific experiments. Despite social and economic restrictions on women, Curie persevered in her scientific endeavors, working with her husband Pierre, and continuing their work after his death. Her work earned her a Nobel Prize.  When World War I began soon thereafter, Curie easily could have worked to build better weapons to win the war, but instead she decided to use her knowledge to promote health and peace. When she learned that doctors at the front were often amputating injured soldiers’ limbs simply because they could not pinpoint the location of shrapnel, she used all her clout and contacts to get small X-ray machines to the front. These ‘petit Curies’ were small vehicles staffed by three medical persons, and their x-rays saved untold lives. A later affair with a married man brought disgrace upon Curie (but not the man), but she continued throughout her life to work for greater scientific knowledge for peace. This book includes black and white photos, humorous comic style sidebars, and frequent experiments for readers to try.

THOUGHTS: This is an engaging look at Marie Curie’s life and scientific work. This book is part of the many popular “Build It Yourself” biographies by Nomad Press, and the most recent three focus on Marie Curie, Ben Franklin, and Leonardo da Vinci.