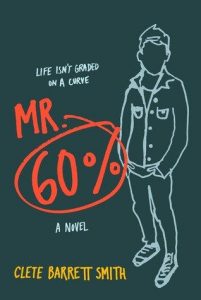 Meet Matt, aka “Mr. 60%”, a nickname earned thanks to just-passing grades and Matt’s habit of doing the bare minimum both academically and socially to graduate high school. The only time he engages in conversation is when he’s completing a “transaction” with a classmate. Instead, he spends his time looking for more creative places to stash his “merchandise” at school so when his nemesis, the vice principal, and the on-campus cop conduct random drug searches, they turn up nada.  Everyone thinks Matt is destined to be a high school dropout, yet what they don’t know is that Matt feels like he has no other choice; he’s only selling drugs to pay for medicine to help ease his uncle’s pain in the wake of a fatal cancer diagnosis. With his mother in jail, his dad never having been in the picture, and living in trailer #6 at the local trailer park with his dying uncle, Matt has limited options and no one to turn to.  When the school board develops a new policy requiring seniors to participate in at least one student activity club in order to graduate, Matt is forced to see he’s not as alone as he thought.  There just might be a friend he can lean on when times get unbearable.  THOUGHTS:  Mr. 60% reminds adult readers, educators especially, that our children are more than what we see on the surface, and reminds teen readers that they’re not alone, that a classmate passing them in the hallway might have it worse than they do.  Despite its somber tone and overwhelming sense of helplessness readers may feel for Matt; there is still a note of hope throughout the story: the fellow classmate whose offer of friendship helps her just as much as it helps Matt and his uncle, the guidance counselor willing to try over and over again to offer Matt options to help him graduate even though he doesn’t seem to appreciate it, the police officer who keeps trying to warn Matt of his impending future should he not change his drug-dealing ways, among others. My only complaint is the abrupt ending; the conclusion needed at least one more chapter to feel complete. Teens and adults alike will appreciate the realistic characters and the how real Matt’s life is portrayed, and the short length is perfect for reluctant readers. 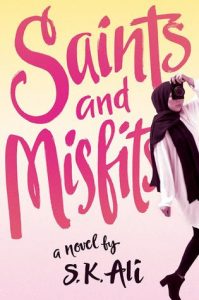 Janna sees people as fitting into three different categories:  saints, misfits, and monsters.  She herself is a misfit:  a Muslim girl who chooses to wear the Hajib, struggling to fit in to a variety of different places and with different people, including two families, since her parents are divorced (and have very different views on religion). Janna has a crush on Jeremy, who isn’t Muslim; he’s a misfit, too, if only because he’s willing to consider dating her.  Then there are saints: people so perfect and good, like her brother’s girlfriend, they make Janna feel like she’s lacking.  Finally, there’s the monsters.  Janna tries not to think about the monster in her life; a monster who pretends to be a saint.  He’s the brother of one of Janna’s friends, and she’s afraid to tell anyone the truth, that he tried to sexually assault her once, and she’s afraid he might do it again.  THOUGHTS:  The sensitive subject matter is handled frankly and yet not too graphically, so that this book is accessible to middle as well as high school readers.  This well written book is an important addition to school library collections both because it features a Muslim heroine, and because it empower girls who have been assaulted. 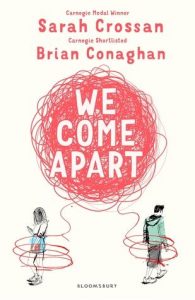 Sarah Crossan teamed up with Brian Conaghan to write in verse from two points of view. Both Jess and Nicu lead desperate lives. Jess lives in a dysfunctional home with a despicable stepfather who beats Jess’ mom and forces her to be an accomplice. Jess lives in fear of her stepfather, but it doesn’t stop her from acting out by stealing things. On her third arrest, she is forced to do community service which is where she meets Nicu, who is also performing community service. Nicu and his family have recently emigrated from Romania to England into the time of Brexit and open racism. We see through his broken-English what it is like for a teenager of color to endure racism from not just his classmates, but his teachers and society in general. Nicu also has the weight of an arranged marriage in his near future to contend with. The story begins with a hesitant friendship between Jess and Nicu and slowly transforms into love. Jess fights the relationship from the beginning, hiding it from her friends, and not step to Nicu’s defense when people attack him because of his Romanian heritage. This book reminded me of Crossan’s, The Weight of Water and the publisher likens it to Una LaMarche’s Like No Other.  THOUGHTS: I read this book quickly due to its being written in verse, but also because I wanted to find out what would happen between Jess and Nicu. It’s rated 9th grade and above due to the domestic violence and a brutal racist attack on the street, although I would consider letting 8th graders read this book. I enjoyed reading about Nicu’s perspective of moving to a country in the throes of Brexit and overt racism all the while living with old-fashioned parents that insist on an arranged marriage. I enjoyed the ending, but I can already hear my students complaining that it lacked the happy ending they seem to enjoy. 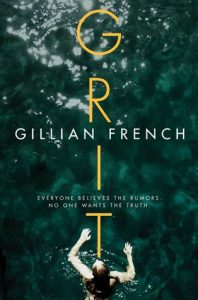 Seventeen-year-old Darcy Prentiss has a wild reputation that precedes her. Most of her classmates believe she is promiscuous, and she is often found drinking and taking dares at parties. The police think she knows more than she is letting on about the disappearance last summer of her former best friend, Rhiannon, and it soon comes to light that she is also hiding another secret for her cousin, Nell. As the story unfolds, mysteries that seemed totally unrelated are woven together, and the truth behind Darcy’s actions is unveiled. Teen readers will easily be able to relate to and empathize with Darcy, making this a great choice for high school libraries.  THOUGHTS: My only criticism of this title is the fact that I had a hard time figuring out what the main story line was. Did I want to know what happened to Rhiannon last summer, or did I want to discover Nell’s secret? Was I more interested in the love connection between Darcy and a boy named Jesse than I was in either of these mysteries? However, regardless of the complex plot (which all ended up weaving together in the end), Darcy proved to be an extremely relatable and likable character.  I felt for her, and I admired her courage; therefore, I needed to keep reading to find out what happened to her and everyone else. A beautifully written title, perhaps more suited towards older adolescents due to its evocative language and sexual references.