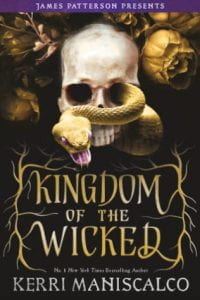 Emilia and Vittoria, twin sisters, are also witches known as streghe. They come from a family of witches who must hide from both humans and The Malvagi, or The Wicked: Princes of Hell who would stop at nothing to capture their souls for themselves. Emilia and Vittoria have grown up hearing stories about the seven Princes of Hell from their grandmother, Nonna, and for protection, each girl wears a cornicello, a horned shaped amulet. According to Nonna, they must never take them off and never put them together because The Malvagi are always watching, and always waiting. When Emilia finds Vittoria murdered, her Nonna’s stories don’t seem so unbelievable anymore, and she finds herself summoning a demon to discover what happened to her sister. When she inadvertently summons Wrath, one of the seven Princes of Hell, she reluctantly accepts his offer to help her find the murderer of her sister and other witches, but from Nonna’s stories, she knows she cannot really trust him or the other princes she meets in her city. However, Wrath is unlike his brothers, and against her better judgement, she starts to rely on their alliance and cannot deny the attraction growing between them. In order to avenge her sister and protect her family, Emilia may just have to make a deal with the devil.

THOUGHTS: Kingdom of the Wicked is a refreshing, new fantasy series that takes place in the 19th century on the Italian island of Sicily. Emilia’s family owns a restaurant called Sea and Vine, and trust me, you’ll be craving some homemade Italian food after finishing this one. Although the time period wasn’t obvious to me when starting the novel, it became more apparent as I continued to read, but to be honest, I had to do a Google search to completely understand the setting of this book. Along with witchcraft, this book introduces the Seven Princes of Hell, referred to as The Wicked, which are basically the embodiments of the seven deadly sins, and they certainly add to the uniqueness and eeriness of this new, historical fantasy.