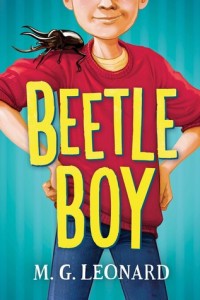 Darkus is sure that his father would not abandon him, but his father is missing nonetheless. As he lives with his uncle and navigates bullies at school, Darkus makes two good friends in Virginia and Bertolt. With his friends, Darkus sets off on a dangerous mission to protect special beetles and find his father. The villain, Lucretia Cutter, an avant garde designer and scientist studying beetles, could be a fiction best friend of Dodie Smith’s Cruella de Vil from The Hundred and One Dalmatians. At the end of the novel suspense is high as the villain escapes leaving an opening for the next book in the series. Included for readers, following the story, is an insect related dictionary.  THOUGHTS: It might be a good idea to ask students who have ever had a pet beetle to get their attention and then promote this novel. An ideal read-a-like is the book In Search of Goliathus Hercules, a book that I reviewed for PSLA in March 2014 – http://pslamediaselectionreview.edublogs.org/2014/03/01/march-2014-bob-fiction-reviews/. 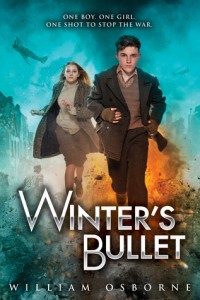 Fifteen-year old Tygo Winter is brave but alone since his Dutch parents were killed and his older sister was taken away (and likely dead). He is hated and hunted by the Resistance for his work for Oberst Kruger, chief of the Gestapo’s “Plunder Squad” of Amsterdam. The Nazis use the ruse of “safekeeping” to loot valuables from Dutch homes, but Tygo has no choice in the matter. His expert locksmith father had worked for Kruger rather than watch his family be killed. Now it’s Tygo’s turn, and the Resistance may kill him as they did his father. Kruger has fittingly named him “Frettchen” (ferret) and keeps careful tabs on everything Tygo does, says, or thinks. While searching yet another Dutch home, Tygo finds a girl hiding in the chimney. He keeps the knowledge to himself (or so he thinks) but returns when he realizes who she is and what she may have: the “Red Queen” diamond that Kruger wants for Hitler himself. Meanwhile, Tygo learns of a secret weapon Hitler has commissioned, a weapon that can destroy New York City. All of this comes together in the last days of the war, and Tygo is an important part of it all. THOUGHTS: This offers a look at an important time in World War II history, the gains and losses of the final days of the war. Tygo’s desperate situation sheds light on the Plunder Squad, the Resistance movement, the atomic bomb, and Argentina’s support of the Nazis. Readers get to know Tygo, but only scratch the surface with other characters, despite Osborne’s occasional narrative switch from Tygo to Kruger or Heinrich Muller. The fact that Osborne has long been a screenwriter explains the fact that this novel reads like a movie. Despite this, middle school readers will be drawn to the topic and enjoy the action. 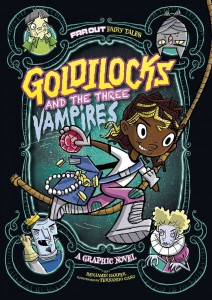 This isn’t your grandparents version of Goldilocks, but it sure makes for an interesting adventure! In the Far Out Fairy tale, we find the spunky, dark skinned Goldi acting more like a tomb raider than a nosy porridge eater. She is searching for King Arthur’s treasure and cherishes the traps and tricks that await her. Finding three treasure rooms, Goldi begins to borrow some items when she hears some surprising voices just waking up from the dead. The vampires are historical, somewhat hysterical, and only slightly evil as they chase Goldilocks away. Though she certainly hasn’t learned her lesson, with more adventures likely ahead.  THOUGHTS: I think it’s worth getting the whole Far Out Fairy tale series for the crazy hybrid comparisons to the originals. The end pages after the story are also valuable, as they include the original tale and comparison to the new twist, plus some great visual questions and a glossary. 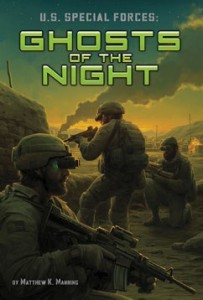 Go behind a special ops mission in Afghanistan with this realistic military adventure. The story starts out of sequence, with the special forces team and its rescued reporters trapped in a possibly haunted house. Then, through various viewpoints, readers learn brief backstories and see the action unravel. There are several moments to consider military decisions and realize the danger and threats which affect soldiers and civilians every day in war zones. This eye opening narrative will end too quickly, with many unanswered questions for readers to ponder and discuss. THOUGHTS: There are nonfiction texts from Capstone to connect those who want more information. Also, readers and librarians should realize that there are casualties in this book. While not graphic, and fortunately glossed over, a pilot, a soldier, and several combatants are killed in action. Still, this story is a fair way to bring those realizations to life for early chapter book readers. 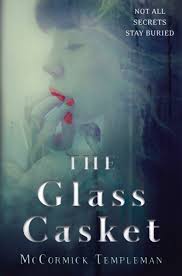 Nag’s End is just a quiet village on the edge of the kingdom until the day five of the king’s soldiers thunder through town bound on an unknown mission.  When the soldiers are discovered brutally killed, many frightened villagers want to write off the incident as a wolf attack, but others, like Tom and his brother Jude are not so sure.  Tom’s best friend Rowan is meanwhile preoccupied with her own mystery.  Fiona Eira, a cousin Rowan never knew she had, has recently arrived in the village.  But instead of welcoming family with open arms, Rowan’s father has forbidden her to speak to her cousin.  Rowan is further conflicted by the interest Tom begins to express towards Fiona.  These situations collide when Fiona is brutally killed like the soldiers.  Could the traditional villagers’ tales of witches, ghosts, goblins and sprites be true?  As Rowan, Tom and Jude investigate the evil seemingly stalking their village, they will be forced to confront their beliefs, their friendships and their familial bonds.  A tale that effectively mixes elements of fantasy, fairy tales, romance, mystery and horror.

While this book may have taken a chapter or two to get going, once the action started, it did not let up, and I was fully engaged in the story.  There were many twists and turns in the plot that keep the reader guessing as to who is behind the evil that kills the soldiers and then starts killing villagers.  The story is told through the viewpoints of several of the main characters, though mostly from Rowan’s perspective.  While I categorized this book as a fantasy/fairy tale, as the review above mentions, it also incorporates elements of romance, mystery and horror.  Therefore, it has the potential to appeal to a wide audience of students, not just fantasy lovers.