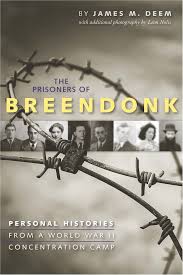 Breendonk was never officially designated a concentration camp by the Nazis, but its status made it no less horrifying for its prisoners.  At first, Jews and non-Jews who had committed petty crimes were held in this Belgian prison, forced to perform mindless, backbreaking labor on starvation rations.  Later in the war, resistance members were brought here for brutal torture and executions.  Except for the testimony and writings of former prisoners, little was known about Breendonk until the author began researching its history.  Deen presents a thorough account of prison life and delves into the backgrounds of many of the prisoners.  Background information about the Belgian resistance movement gives context.  The book is interspersed with valuable primary sources, such as photos, letters and drawings.  An afterword tells readers what happened to many of the prisoners featured in the book.  THOUGHTS:  This would be a solid addition to any library with high interest in the Holocaust or where curriculums delve into this subject.  The sketches by an artist imprisoned at Breendonk are most fascinating; I’ve never seen any Holocaust resource with anything so unique.