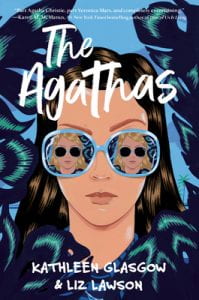 Once one of the “Mains” – wealthy kids at Castle Cove High who go by their last names – Alice Ogilve has been a social pariah since disappearing for five days last summer, causing her friends, family, and especially her ex-boyfriend Steve a lot of heartache and costing the town of Castle Cove a lot of money. Since then Alice has been homeschooled while on house arrest, and her only friend was the complete works of Agatha Christie. Now it’s Halloween (Alice is under dressed for the occasion.), and the message: “Alice Ogilve is crazy.” greets her on her locker. Alice’s former best friends are less than thrilled to see her. To make matters worse, Alice is called out of class to visit Ms. Westmacott’s counseling office, and she’s assigned a peer tutor. One of the “Zoners” – kids who seem to be thrown together out of necessity because they’re poor – Iris prefers to fly under the radar and focus on her studies. Though they’ve gone to school together since kindergarten, Iris only accepted the tutoring job because of the promise of a nice paycheck, regardless of how well Alice does. Besides, she has other things on her mind like getting herself and her mother “out of Castle Cove and away from the Thing.” When Alice’s former best friend goes missing, the town thinks she’s “pulling an Alice,” but Alice knows Brooke never would run away. Though unlikely, Alice teams up with Iris, and the two have to work together to figure out what happened, especially when the local police and Brooke’s own father think nothing is wrong. But each with their own secrets, it won’t be easy to let someone new in, especially someone so different.

THOUGHTS: There are a few mysteries within this character driven thriller, and readers will root for different people throughout, unsure of exactly what happened until the big aha moment. Recommended for high school collections where compelling mysteries are popular.

The previous summer, Alice suddenly disappears, and the small oceanside town of Castle Cove goes into a panic trying to locate her. She shows up unharmed without an explanation five days later. Her friends are not willing to welcome her back with open arms, and she begins to struggle with school. It is a year later, and another girl goes missing. It is believed that this is a copycat of what Alice did before, so no one is in a hurry to find her. Except Alice and her mysterious tutor, Iris. When the girl’s body is discovered, the police immediately make an arrest. Alice and Iris believe they have arrested the wrong person, and with the help of Iris’s friends they channel Agatha Christie to solve the mystery.

THOUGHTS: This book is for fans of One of us is Lying and We Were Liars. The story revolves around a small town with many mysterious characters. I really enjoyed the back and forth between Alice and Iris since the chapters alternate between their voices. It also has a map in the beginning of the book. Who doesn’t love a map?