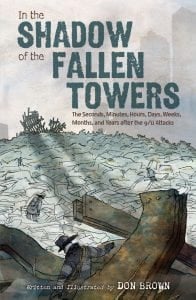 Don Brown excels at creating graphic nonfiction that introduces pivotal events in U.S. history to young readers. His previous titles explore the 1918 flu pandemic, the Dust Bowl, Hurricane Katrina, and more. Now, with the twenty-year mark approaching, In the Shadow of the Fallen Towers captures the tragedy, heroism, and aftermath of the September 11, 2001, terrorist attacks in New York City, Washington D.C., and Pennsylvania. Panels depicting the day of the attacks feature chalky, muted tones that represent the ash covering “Ground Zero” and the smoky hallways of the Pentagon. Bright orange flames also appear throughout. Expository text accompanies the artwork, along with first-person speech bubbles from eyewitnesses, first responders, George W. Bush, soldiers, and survivors. As the subtitle suggests, the author’s timeline incorporates the months and years after 9/11, including the grim victim recovery efforts, the massive clean-up, and the invasion of Afghanistan. Highly controversial topics, such as “enhanced interrogation” of suspected terrorists, are also briefly mentioned.

THOUGHTS: Don Brown’s books leave readers wanting to know more, which is a good thing; they are introductory overviews of events that will hopefully lead young readers to further, more comprehensive sources. 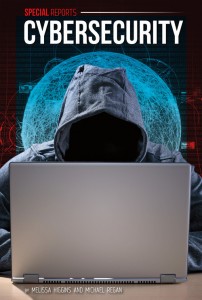 Special Reports, a series from ABDO, takes on the high profile topic of ISIS.  In this series Special Reports: ISIS creates an easily accessible way for all students to understand the complex and often confusing topic of ISIS.  Nearly every page has a text box highlighting key definitions or quotes from experts on ISIS.  The larger print and vivid photographs are essential to drawing in students.   Each book in the series includes essential facts, a glossary, additional resources, source notes, and an index to aid readers in research on this serious topic. Thoughts: Special Reports series is great resource for refining research skills.  The text boxes, graphs and illustrations will help students synthesize relevant information for use in their research projects. 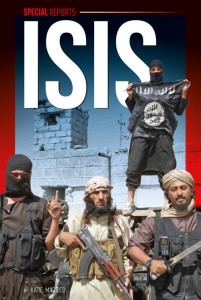 Special Reports, a series from ABDO, takes on the increasingly serious topic of cybersecurity.  In this title, readers journey through time beginning with the history of the Internet to modern day hackers and hacktivists all the way to the future of cyberthreats and future solutions.  Many of the pages have a text boxes and graphics that are familiar to readers.  As with the rest of the titles in the Special Reports series, the larger print and vivid photographs are essential to drawing in students.   Each book in the series includes essential facts, a glossary, additional resources, source notes, and an index to aid readers in research on this serious topic. Thoughts: The Special Reports series is great resource for refining research skills.  The text boxes, graphs and illustrations will help students synthesize relevant information for use in their research projects. 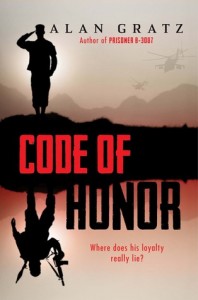 Kamran Smith is living a great life: senior football star, he and his girlfriend are homecoming king and queen, and he has strong family ties, especially with his brother, who’s eight years his senior. He’s even on track to attend West Point and enlist in the Army, following in his brother Darius’ footsteps. Sure, his mother is from Iran, and he looks Iranian, but he’s 100% accepted, 100% American.

Until Darius appears in a terrorist video broadcast on American TV, spewing anti-American religious rants, standing by while an American journalist is beheaded, and pronouncing coming destruction.  It’s bad enough seeing the videos and facing his own questions—dealing with the personal fallout in his community is worse. His girlfriend dumps him; his best friend doubts Darius (and Kamran); news crews hover and torment; his parents are just holding it together. Then Homeland Security ransacks their home for information and takes Kamran and his parents into custody. The questioning makes Kamran question his own conviction that Darius is innocent, that the “code of honor” he and Darius pledged to one another still stands strong.

Until Kamran really listens to the videos of Darius and discovers his brother mixing up the stories with heroes and villains they once pretended to be. It doesn’t make sense—or does it? Could Darius be sending messages in the videos? The authorities don’t believe it, except maybe one…. Or does he? Does Kamran believe himself? Soon Kamran finds himself outside the walls and in a race to prove his brother’s innocence. Will he get to do so? What if Darius is not so innocent? Does their Code of Honor have meaning to anyone but Kamran? This is a tense action story that has Kamran and the reader changing their minds about Darius’ intent, and what the outcome should or will be. Violent but not gory, certainly a realistic plot, Gratz wraps up this story ever so neatly. Safe for middle school and thought-provoking about trust, honor, and loyalty. 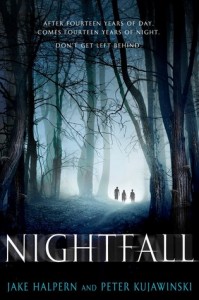 From its very beginning, Nightfall builds a sense of foreboding in readers.  Marin and her twin brother Kana live on the island of Bliss.  The residents of Bliss live in daylight for 14 years, but when the sun sets at the end of the cycle, they must migrate to the desert lands to wait until the next sunrise on their island fourteen years later.  Before the tide retreats and they sail away, each family performs a series of intricate rituals; deep cleaning, moving furniture, placing items throughout the house, and removing locks.  The description of these rituals is the reader’s first clue that there are “nighttime” inhabitants of the island.  On the day of departure, Line, a close friend of Marin and Kana is missing from the oceanfront.  Marin and Kana decide to search for him during chaos of the departure.  In the end, all three teens are left behind.  They try desperately to find a way off the island, are pursued by the nighttime “creatures”, and find out some uncomfortable truths about themselves and the inhabitants of Bliss.  This is creepy, mysterious and, ultimately, enjoyable tale.  THOUGHTS: I would not consider this book to be an outstanding or innovative work of literature.  However, it is an enjoyable and fast-paced read, guaranteed to send a shiver up your patrons’ spines. It is a perfect addition to your Halloween collection.

From the outset of the novel, it is clear that the darkness is something to be feared and that monstrous creatures inhabit the island at night.  However, the authors do an expert job of making the obvious elements of the story surprising and scary.  Each of the main characters in Nightfall has a secret and has told lies, so there is an element of suspicion throughout the novel.  The plot twist involving Kana is truly unexpected and the reader will begin to question who the good and bad guys really are.  In the final scene, Marin, Kana, and Line escape the island, so there may be a sequel (set in the desert lands) in the works.