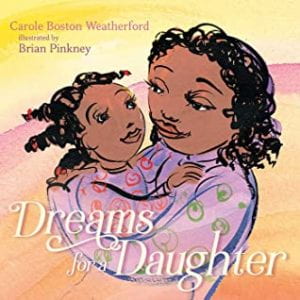 In this lovely picture book, a Black mother voices her hopes and dreams for her newborn daughter. Speaking in first person, the unnamed narrator thinks about her child’s future and tells her how she will care for her in every stage of her life. As a parent, she will not only support her with physical challenges, like taking her first steps or riding a bicycle, but will also provide guidance on dealing with adversity, speaking up for herself, and choosing her own future. On the final pages, the mother reminds her daughter that she will always watch out for her, even from afar when she grows into an adult, “trusting God to keep Her eyes on you.” Weatherford has created a very moving tale of a mother’s love for her child. Brian Pinkney’s expressionist illustrations help convey the emotions this woman feels as she embraces her infant, anticipating her future and promising to “show her all that she can.” Pinkney draws a swirl around the pair on each bold and colorful drawing, which perfectly depicts the mother’s all-encompassing love.

THOUGHTS: This touching story is perfect for mothers with young daughters and would be a wonderful gift for a new mother. It could also be read aloud to a group of young children to encourage them to face challenges and go forward confidently into their futures. 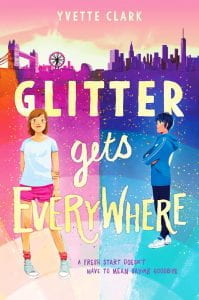 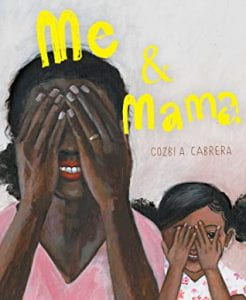 A young girl walks readers through an average day spent with her loving Mama. On the end paper, a series of mother/daughter still-life objects are presented: a large wooden spoon alongside a smaller version; a red bicycle and a tricycle; a knit winter cap next to one with fuzzy ears and pigtails. Through this series of objects, the reader gets a glimpse of the young girl’s admiration for her mother as she points out their similarities and differences in a distinctly wondrous and childlike way. Over breakfast she shares how Mama’s dainty tea cup “goes clink, clink, clink with a spoon” while her red sippy cup “goes duh, duh” yet together they sing like a chorus for their morning ritual. Later, she tells readers that Mama’s red rain boots are “bigger than my yellow ones” following up with an explanation that their dog, Max,“doesn’t wear boots.” After a day of errands and rain puddles, Mama reads a story and tucks in the girl and her brother, Luca. Although her brother seems to fall asleep immediately, the young narrator has just enough time to reflect on the day and familial love as she too drifts off. Stunning full-bleed acrylic illustrations feature detailed portraits of Mama, Luca, and the young girl with their beautiful varying shades of rich Brown skin and dark hair worn in a variety of styles throughout the day.

THOUGHTS: This lovely picture book immortalizes the precious mundane moments that make up a relationship between mother and daughter. Papa and brother Luca are also mentioned throughout, creating a snapshot day in the life of one happy family.