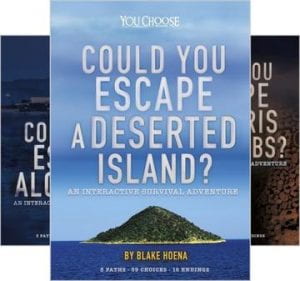 Reminiscent of the “Choose Your Own Adventure” series from the early 80s, this series takes you on a survivalist journey to various locations. Each book in the series offers 3 paths with 41 different choices and 18 possible endings. This reviewer had the opportunity to choose a path through the Paris Catacombs, 100 feet below the cities of Paris. The path started with a choice to explore the catacombs as a young worker in the 1700s, a modern-day tourist, or as a rescuer of a group of teens lost in the labyrinth. Written for younger adventurers, this is an enjoyable book for grades 3-7 as you get to choose your own destiny during your journey. Filled with photographs of the actual catacombs and artists renderings of Paris, this adventure series is sure to delight students.

THOUGHTS: This is a great modernized version of the “Choose Your Own Adventure” books that many of us grew up with that will delight this generation of readers. A great read for reluctant readers since the text is not overwhelming and the chance to read the book several times to create new endings will entice them to read more. 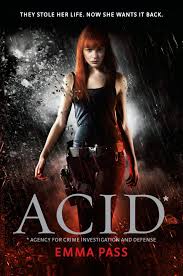 Jenna Strong is a 17 year-old living in Upper London when her world collapses around her.  Arrested by ACID (Agency for Crime Investigation and Defense), the totalitarian government controlling London in the year 2113, Jenna is accused of murdering her parents and is sent to the all-male, high security prison, Mileway.  As Jenna tries to figure out what happened (she has no memory of the murders except what ACID has told her), Dr. Fisher, the only caring person in Mileway, plots Jenna’s escape.  Once at “The Facility” somewhere in London, Jenna is nursed back to health by a rebel group plotting to overthrow ACID and return London to a more democratic state.  As Jenna regains her strength and more memories, she tries to return to life, in poverty stricken Outer London, a world she never saw growing up.  When her alias is made by ACID, she takes off with part of the reason she was found out, Max Fisher, Dr. Fisher’s son, but he doesn’t know she’s Jenna Strong, a wanted murderer.  As the two continue running from ACID, they encounter more ACID traitors, but these traitors are different from those at The Facility.  As Jenna’s identify is again compromised, she must learn who to trust, when to run, and how to hide, but will it be enough to keep her alive and away from ACID?

ACID: Agency for Crime Investigation and Defense is not the typical YA dystopian.  Instead, it provides more “meat” to the story and intertwines characters and plot that force the reader to truly think about the possibility of ACID as a government.  The novel could be placed in present day instead of 2113, especially when considering terrorist groups and the governmental control they have in countries.  This book could easily be used in English, or a government or current events class, as a fictional representation of government structure in comparison to how some governments and terrorist organizations control people.

As a final note, ACID is written and ends as though more should come.  I do not know if it is set for a series or will become a series.  According to Emma Pass’s website, her next book is due out in 2015 and is about building stronger soldiers.