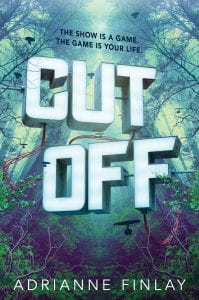 A group of teenagers is competing for a one million dollar prize, each with their own reasons for needing it. In order to be accepted onto the new reality show Cut Off, contestants go through a rigorous interview process and psychological evaluation. As readers are introduced to each character throughout the early days of Cut Off, interview segments and details from the evaluations are provided. Contestants need to outlast each other while spread out around a large island jungle. When they have no choice but to work together, the contestants begin to realize they might be more cut off than they thought. Their skym cameras (3D cameras that hover and follow their every move) still work, but the tap out button seems to be malfunctioning. Could something be wrong with the fully immersive reality show? Determined to figure out what’s going on, the contestants work together to survive, being more cut off than they ever thought was possible.

THOUGHTS: This action-packed adventure has three distinct parts. What starts out as serious outdoor survival takes a sharp turn towards science fiction. Readers will want to know who outlasts the others, but those who stick with it may have questions. 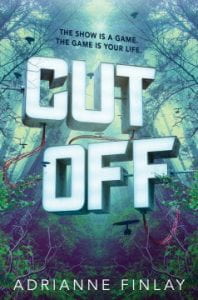 Contestants on the new virtual reality television show Cut Off have their own reasons for competing. Part I begins with contestant interviews as each player is introduced at their current location on a remote island. Readers get to know River, a natural survivalist whose parents died in a car accident; Cam, who feels responsible for her little brother due to their mom’s is incarceration; Trip, whose technology is what makes the show’s virtual reality experience unmatched; and Liza, who seems to know a lot but isn’t inclined to share much about herself. As the contestants are forced together to survive, they begin to realize that they may be more cut off than they signed up for. When technology begins to fail and fears become real, they have to rely on each other to survive. But they signed on to compete for a one million dollar prize, and they each have fears, some that may be too difficult to overcome.

THOUGHTS: Told in several parts this action-packed adventure begins with meeting basic survival needs and evolves into a high tech world of survival. Fans of stories like Warcross by Marie Lu, Ender’s Game by Orson Scott Card, The Eye of Minds by James Dashner, and Ready Player One by Ernest Cline will get their tech adventure fix in this stand alone title. 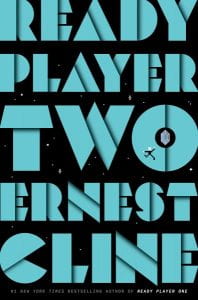 Wade Watts has won the contest. He’s rich, he’s famous, he’s living the life of his dreams? Inheriting billions of dollars and taking control of GSS has left Wade wrapped up in a lavishly padded but empty life. With robotic staff at home and avatars inside the Oasis, Wade very rarely interacts with actual, physical people. While the rest of the High Five move on, creating great lives and names for themselves, Wade is left behind. That is until the unexpected happens and the High Five are thrown back together again, with a new race to save the Oasis. One with even greater consequences than before.

THOUGHTS: Ready Player Two is as much an action-packed whirlwind as the first. Readers will delight in meeting friends, old and new, that change the face of humanity.

Wade Watts has just won James Halliday’s contest and, along with his friends, the high five, has become one of the new co-owners of Gregarious Simulation Systems. As James Halliday’s heir, he now wears the robes of Anorak while in the Oasis, giving his avatar Parzival unlimited power. Days after winning the contest, Wade also discovers a new technology called ONI (Oasis neural interface) which has never been released to the public. Halliday specifically left this technology to his heir, and Wade, along with his co-owners Aech, Art3mis, and Shoto, has to decide if the world is ready for this technology. Only Art3mis objects, and soon the world starts experiencing the Oasis in a new and improved way. Wade quickly becomes addicted to the new ONI experience, and lives a very solitary life, always waiting to get back into the Oasis. However, when a new quest is revealed, similar to Halliday’s egg contest in the previous installment, Wade needs all of the help he can get, from both old friends and new, and Parzival must once again step up to the challenge to save the Oasis while keeping ONI users out of danger.

THOUGHTS: The futuristic setting of both Ready Player One and Ready Player Two doesn’t seem as unrealistic as it did to me when I first started this series. One of the benefits of the Oasis is that people can interact safely without the fear of spreading disease, and they often reference a terrible flu that killed millions before the Oasis became so widely used. Since so many of our interactions in 2020 were virtual, it makes me wonder if something like the Oasis will be in our future as well. I’m glad this book picked up right where book one left off, and the events that transpired after didn’t come as too much of a surprise to me either. Readers must remember how young Wade Watts is, and after inheriting everything from James Halliday in the previous book, it only makes sense that he’s not always going to make the right choices after becoming a billionaire overnight. Mostly, I loved all of the 80s pop culture references, especially the John Hughes planet inside of the Oasis! It was a nice wrap up to events set in motion in Ready Player One, and a perfect book to read during these primarily virtual times.