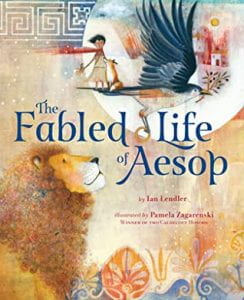 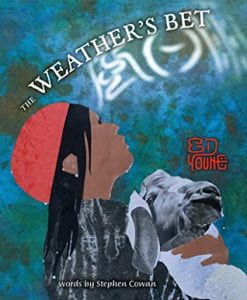 The Wind and the Sun may be a familiar Aesop fable to many adults but a new puzzle for young readers. Ed Young has recreated the fable into The Weather’s Bet with his usual collage and mixed media. We see a young shepherd with a red cap who becomes the unknowing target of a bet between the wind, rain, and sun above. While wind and rain seek to use forceful methods of persuasion, the sun patiently waits for its gentle warmth to win out. Young brings in an environmental note in the forward and introduces several Chinese pictograms to symbolize the competing weather. It’s a good bet that children will appreciate and discuss this fabled work with fresh voice and vision.

THOUGHTS: The story length is ideal for a short storytime, and can easily be compared with other fables and versions of the story. The moral is not overt, so a discussion with classes would be recommended. Recommended for K-2.