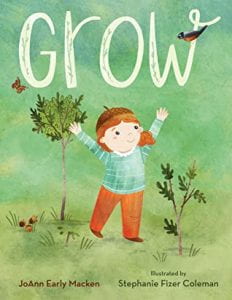 This charming picture book is all about the wonders of growing up. The story is told in a series of “If you were a…” statements, comparing a child’s development to the life cycles of animals and plants. As a mother and child watch falling acorns, the narrator relates an oak tree growing from a tiny acorn to a small child spreading her roots in the world. Later, a grandfather and his grandsons spot a deer with her fawns running through the woods. Just as a fawn’s first shaky steps develop into a sprint, the wobbly gait of a toddler becomes a confident stride. The delightful illustrations by Coleman are rendered digitally and are the winning elements of the book. For each animal or plant comparison, the child’s clothes take on that appearance. A girl is pictured wearing a green jumper with an orange shirt, mimicking the green shell and orange spots of a turtle, and the acorn watching child wears a beanie that resembles the nut’s cap. On the title page, there is an oak sapling, and on the last page, it has grown into a large tree.

THOUGHTS: While the comparisons in the text are a bit weak at times, the book’s drawings bring them to life. Children will enjoy listening to the story and poring over the details in the pictures. A supplemental purchase. 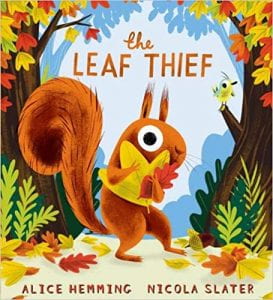 Squirrel is contently lounging in his tree watching the sun shine through the colorful autumn leaves when he suddenly realizes one of his leaves is missing. He immediately enlists Bird’s help tracking down his missing leaf. He questions Mouse to no avail. The next day, he notices that more leaves are missing! He accuses Woodpecker and even Bird of stealing his leaves, but he soon discovers that there may be another explanation to his missing leaves. A humorous story sure to delight young readers, this would be an excellent choice for a fall read aloud.

THOUGHTS: Endnotes in the book explain some of the science behind the arrival of autumn, making this the perfect introduction to life cycles and the changing seasons. As an added bonus, Squirrel’s exaggerated actions and expressions make for a comical story that is sure to grab the interest of elementary students. This is a solid choice for elementary science collections. 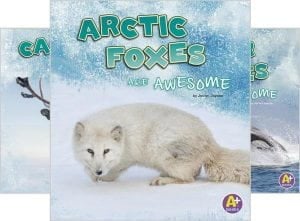 Narwhals Are Awesome gives readers a glimpse inside the life of a narwhal, one of the Arctic Ocean’s most interesting creatures. Known as the unicorns of the sea, these animals have a long tooth that sprouts through its lip and looks similar to a unicorn’s horn. People hunt narwhals for this exact reason: their tusks are often sold or used to make jewelry. Like dolphins and other whales, narwhals use echolocation to search for their food which they find on the ocean floor. Narwhals can stay underwater for twenty-five minutes before having to return to the surface to breathe air. This means that climate change can be harmful to them; as rising temperatures cause ice to melt, the ice moves while narwhals swim underneath. Sometimes, they can become trapped under the ice and drown. Currently, there are about 75,000 narwhals in the ocean, but they are hard to study given the very chilly climate of their habitats. But one thing is for sure – no other animal is quite like them.

THOUGHTS: As narwhals become more prominent in books and graphic novels (such as the Narwhal and Jelly series by Ben Clanton), younger students have shown an increased interest in these creatures. Full of facts and written in kid-friendly language, this book shows readers what a narwhal’s life is like in the Arctic Ocean while also addressing current event issues like climate change. Students also will enjoy up close and personal photographs of these creatures. Although the critical thinking questions in the back of the book are lacking, other features, such as the list of other nonfiction narwhal books and websites to explore, are valuable. There is even a website focused on STEM-inspired narwhal activities. This book is a perfect nonfiction addition to any elementary library.