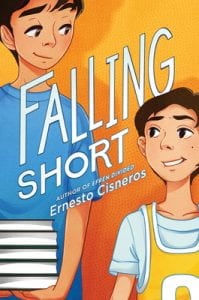 Sixth graders, Isaac Castillo and Marco Honeyman, are best friends, next door neighbors, and complete opposites. Isaac is a tall, basketball star who struggles in school; smart as a whip, Marco gets mistaken for a kindergartner because of his short stature. What both of them share is mutual love and care and problematic fathers. Unable to cope with his alcoholism, the loving but troubled Mr. Castillo is estranged from his wife and son. On the other hand, Marco’s parents are divorced, and his father would rather write an alimony check than visit his son. The boys’ warm friendship stands up to the pressure when the pair start Mendez Middle School in California. Marco classifies the different students like fish, some are aggressives and some are community minded. In Falling Short, author Ernesto Cisneros makes a solid case that being community minded is possible and preferable. Having almost failed fifth grade, Latinx Isaac has to prove that he can make the mark, and perhaps ease some of his parents’ stress. Mexican-American and Jewish Marco, too, wishes to impress his neglectful father, a jock, who dismisses Marco’s scholastic achievements. The basketball team is a choice that fits both boys’ needs: Isaac can coach Marco in baller moves; Marco can be Isaac’s loyal study buddy. Determined to escape the taunts of the school bullies–especially basketball eighth grade standout, the looming Byron–Marco takes on becoming a basketball player as an intellectual pursuit. Motivated by Marco’s relentless efforts to learn how to play ball, Isaac disciplines himself to complete all homework assignments. Their bro’mance gets them through their respective feelings of inadequacy in either sports or studies and their family issues. Marco skips an elective course and completes Isaac’s missed homework assignment. Isaac convinces Coach Chavez that Marco will be a valuable player on the team. Told in alternating voices that mix feeling with humor, the story reaches a climax when Isaac’s dad suffers a car accident while driving drunk right before the big basketball tournament. To add to the tension, Marco’s errant dad comes to see him play at the tournament. Reading how these true friends push each other to achieve their goals and affirm themselves in the process imitates the deft moves of a satisfying game and does not fall short.

THOUGHTS: Author Ernesto Cisneros mixes lots of details in Falling Short that cater to the typical middle school student: description of basketball plays, mention of well-known basketball players, team spirit, an explosive farting episode. It also touches on the awkwardness and helplessness kids can feel when dealing with parental flaws. The book includes some nice touches that point to a better world: Coach Chavez throws Byron, the bully, off the team when he finds out Byron humiliated Marco; Marco has a short teacher who can be both self-deprecating and inspirational; there is a girl on the basketball team; some of the other team members also look past Marco’s lack of height and see his kindness. Spanish phrases are scattered throughout the book. 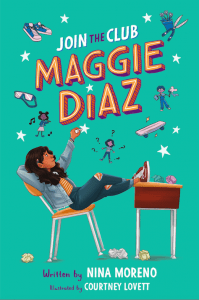 Reminiscent of Frazzled by Booki Vivat, Join the Club, Maggie Diaz by Nina Moreno has as its protagonist a Cuban-American girl ready to start seventh grade in middle school whose friends seem to have found their niches while she is still searching for hers. As the short, sweetly illustrated novel opens, Maggie’s mother is finishing her accounting degree, the Diaz family has welcomed a new baby brother, and their grandmother has come to live with the family in Miami after their grandfather’s death. Until her tiny house is completed in the family’s backyard, Abuela has become Maggie’s roommate. She is not shy about providing Maggie with unsolicited direction and advice (in Spanish). Maggie’s aim to be independent and grown up is thwarted by her lack of a cell phone, her busy parents’ strict rules, and the overshadowing of her seemingly perfect older sister, Caro. Intertwined seamlessly in the plot is Caro’s LBGTQ+ relationship with her tutoring buddy, Alex, and Mrs. Diaz’s positive acceptance of their relationship. Pressured to appear like she is fitting in, Maggie tells little white lies and tries joining every club she can. The one catch to admission to a club, however, is good grades. Maggie finds herself overextended and in over her head and her grades are slipping. If that happens, her prize of a cell phone and more freedom go out the window. With humor and pathos, Maggie muddles through and finds strength in unexpected people. Young readers will identify with Maggie’s struggles to find her special thing and keep up with her schoolwork in an unfamiliar environment of both a new school and a new stage in life.

THOUGHTS: Fitting in and finding one’s place in middle school is not an easy task. Books that have characters failing and trying at the same thing can be encouraging. It helps that Join the Club, Maggie Diaz is a quick read. Maggie’s up and down relationship with her grandmother is also a connection with real life. A fun and relatable read, especially for reluctant or struggling readers. 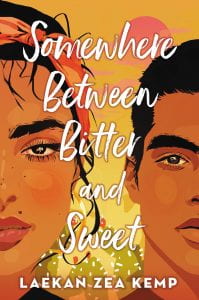 Somewhere Between Bitter and Sweet hits all the right notes for a young person’s fantasy romance. In alternating narratives, the reader follows the growing romance between talented Mexican-American chef, Penelope (Pen) Parado, and undocumented restaurant worker, Xander Amaro. Nachos Tacos is Pen’s father’s restaurant in Austin, Texas, and the salvation of the neighborhood, providing a handout or employment to many, despite the glaring threat of a ruthless loan shark, J.P. Martello. The restaurant is dear to Pen’s heart–not only because it is there she can express her culinary skills–but also because of the sense of family it represents. She is devastated when she is banished from the restaurant after confessing to her parents that she has not attended a full semester of nursing school. Traditional Mr. Parado expects his older son, Angel, to carry on the business despite Angel’s disinterest. New employee, Xander, enters the wait staff on Pen’s last day, and though some point out her brash, bossy manner, he is smitten. Eighteen-year old, independent Pen finds a cheap apartment with the help of bff Chloe and a wretched job at a Taco Bell-like establishment. In spite of her take-charge personality, Pen suffers from self esteem issues and the narrative alludes to some self-harming; she does take medication for her low moods. In addition to being undocumented, Xander is actively searching for his father who left the family when Xander was a toddler and has never attempted contact with either Xander or his own father, Xander’s guardian. As the narration asserts, each has their own scars. The chapters develop with Pen dealing positively with her complicated love-hate relationship with her father and Xander’s appreciation of his feelings of belonging to the ragtag Nacho crew. Their days revolve around working in their respective restaurants, hanging out with the other Nacho workers, food, and their romance until the restaurant’s future is in jeopardy from the menacing loan shark. This antagonist brings the needed friction for the story, culminating in a predictable conclusion that leaves the reader with admiration for the resiliency of Pen and Xander and their Latinx neighborhood.

THOUGHTS: There is nothing too deep here or too risky (Pen and Xander have some deep kisses and smoldering feelings, but nothing more; some foul language and drinking). Latinx author Kemp tells an old-fashioned love story with the typical tropes but with more interesting words and the addition of some mental health and immigration issues. Her major and minor characters are likeable and developed. One unexpected relationship is Xander’s friendship with the local police officers, despite his undocumented status. Younger teens wanting a romance or older ones looking for an escape novel will be hooked. 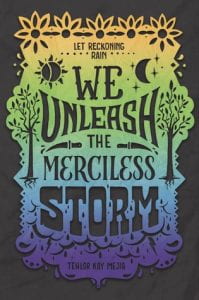